Review: The food is brilliant at this elegant old dame of Dublin dining and easily outflanks restaurants where tables are much more difficult to secure 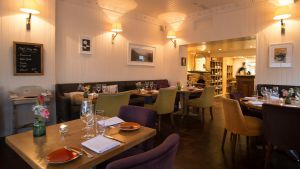 Canal pace suits me. The gentle tug of the water feels perfect for a runner who hopes for a red man at every crossing. I’ve run or pedaled by Locks on Dublin’s Grand Canal countless times, smelled the wood smoke from its fire, worried about it when it was quiet. Lately I’ve been admiring the Dr Who Tardis blue colour they painted the outside along with a neon red X.

The X marks the spot of an elegant old dame of Dublin dining. Often seen rarely visited, Locks popped into my head when I needed a venue for lunch to celebrate a project that has almost run its course. It’s a place that still feels like an occasion, the restaurant equivalent of a good dress waiting at the back of the wardrobe.

The last time I visited, a new young trio of chefs – Keelan Higgs, Conor O’Dowd and Paul McNamara – had turned the lights back on in Locks after the unfortunate incident with the star that came and went. The pleasure in reopened Locks was as much in the place as the food.

Today the fire is lit and its cheery crackle pulls us to the larger rounder table near the cosy kitchen end rather than the sun-drenched window tables at the front. It’s always sunny in Locks, or maybe it just feels like that. We have our choice of seats. The restaurant is quiet despite the fact that it’s a Friday, the day when Dubliners used to have licence to lunch at leisure.

The restaurant is calm, less nerve jangled than those earlier days, like a place that knows what it is rather than somewhere reaching for what it wants to be.  There’s a delicate balance to maintain between the energy of a young venture and a slump into evergreen menu staples the kitchen could slap out in its sleep.

We’re in the teeth of the hungry gap for any restaurant interested in serving food grown under the same sky. There are only so many things you can do with roots and radishes as we wait for the fresh shoots. By the time you read this, the endless winter will hopefully be on the wane but today’s menu bridges the gap deliciously with flavours of pickle and smoke. There’s ham, smoke and apple, gobstopper-sized croquettes of smoked ham with disks of glistening apple so green it’s as if skin and flesh have melded into one colour and texture. There’s a springy house sour dough with smoked trout and dillisk butter good enough to eat with a spoon.

Then poached sea trout, which sounds like a nursing home staple, something with pale peachy flesh slippery enough not to be a choking hazard. Here it’s a lush slice of fish of such a vibrant colour that it looks like it was sliced sashimi style from something still flapping, then scorched with a flame and plated. It’s topped with strips of pickled lemon rind so thin you could read your phone through them and rounds of radish crisp and clear as botany drawings. There are tricolour blobs of herb oil, creme fraiche and roe to finish one of the most beautiful starters I’ve had in an Irish restaurant.

Alice is having the onion soup. That too is nothing like it sounds. There’s a smoked buttermilk curd like a captured cloud in the bottom of the bowl, currachs of pearly charred onions and lifebuoy rings of battered shallots, like a bay with the tide gone out, all waiting for the soup which is poured from a jug at the table. This is an onion soup that stitches together cream and tangy onion sweetness, with neither flavour overpowering the other.

My gnocchi look like cocktail sausages but the meatiness comes from chanterelles and skin on small wedges of jerusalem artichoke surrounding an aerated chestnut puree. The surprise under the chestnut is a gooey lightly done egg, to complete the umami pleasure of a meat-free full fry. Alice has the cod which has lightly pickled artichokes and juicy mussels, more flavours of smoke and tang to bring it all together beautifully. Hispi cabbage has been charred and topped with a crunchy scattering of onions, garlic and oats.

Rhubarb and custard brings every iteration of each element together in a glass and a peanut butter tart is a pitch perfect riff on the pleasure of a Snickers bar by a whip smart pastry section. There’s a “banana milk” ice cream that tastes as ridiculously trashy as it sounds.

Locks has long been Dublin’s loveliest room, a place to take stock of the path we’ve come down and prepare for the one up ahead. In the old days much of the draw was the gliding of swans and the flowing of wine on a Friday afternoon. Almost three years since the new generation took over it’s got a menu that could stand alongside the city’s starred restaurants (not that I’d wish a star on it anytime soon). It’s a menu that underpromises and then overdelivers. Locks has come into its own. The food is brilliant and easily outflanks restaurants where tables are much harder to secure.  Go soon to enjoy a restaurant at the top of its game.