Arca: A little taste of genius in the Mexican jungle 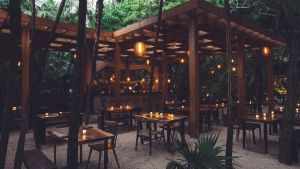 I’d like to know the name of the tree that’s dropping leaves on my dinner. But the waiter only knows the palm trees. They’re a rare species and they were here first, he explains so the restaurant had to be built around them. Yes Toto we’re not in Kansas anymore. We’re in Arca in the Mexican jungle where candles light your way to the loos and that man at the next table who looks like Graham Norton is, actually, Graham Norton.

Arca opened three years ago on Tulum’s beach strip on the Yucatan peninsula. Last year chef Jose Luis Hinostroza became a partner. Hinostroza is the California-raised son of a Mexican family. He worked at Alinea in Chicago and El Cellar de Can Roca in Spain before heading to Copenhagen restaurant Noma. That trip brought him to Tulum to spearhead Rene Redzepi’s Noma Mexico pop up last year. Arca was where the young chef stayed to bring Nordic locavore spirit to this patch of jungle with its bar and open roof of timber cubes on square columns. Later this summer he plans to carve out his own place in the jungle, cooking in fire pits that sound not unlike Irish fulacht fiadh.

Arca is beautiful. There are dark wood tables, gravel underfoot, and the whole thing is (barely) lit with glowing bulbs and candlelight. It feels less hand-built than Hartwood, its white painted next door neighbour, more monumental in scale. As we take our seats at the generously large table we get a waft of copal resin, the incense they burn in billowing clouds to try to keep the mosquitoes from munching the diners. It makes it all smell weirdly like a candlelit mass. With Father Noel Furlong in attendance we could be at an Easter vigil without the bone-chilling cold. Benediction comes from salty drifts of warm wind wafting over over us under a starry sky and a nearly full moon.

American eaters arrived in their droves to this jungle strip with Hartwood next door when New Yorkers Eric Werner and Mya Henry hacked their restaurant out of the swampy, unglamorous side of the road eight years ago. Hartwood was a pipe dream of making an off-grid restaurant in a magical place where they loved to holiday.

This side of the road now feels like an expensive festival that refused to fold its tent and go home. Shipping containers are artfully lit to showcase floaty dresses and sandals that cost large amounts of pesos. A table in Arca has been hard to secure. Emails have gone unanswered and my husband has eventually cycled out for a face-to face-conversation. And now we’re here for a memory-making meal.

It’s sharing plates, which suits the laid-back vibe. And most of them are great. There’s a soft shell crab taco, the barely solid crustacean battered in amaranth tempura and served on chaya, a spinach-like leaf cut into a soft, bright-green circle, instead of a tortilla. There’s a tartare of roasted peppers, smoke and sweet topped with a cured egg yolk and toasted almonds for crunch. Springy warm sourdough is scorched and charred like something rescued from the embers. They do a prawn ceviche here without the citrus normally used to “cook” the raw prawn meat. Instead it’s cured in the juice of the xoconstle, the fruit of a prickly pear cactus. Instead of a citrus zing the pink cactus fruit juice has a subtler astringency letting the prawn flavour sing. There are grilled octopus tentacles so fresh and juicy they taste like lobster but its lentil puree with “lentil chips” crisp pellets of lentils are just a bit too much of a muddy blend to float my boat.

The standout dish is two plates. It is, our waiter explains, a dish based on contrasts. On the white plate there’s suckling pig cooked to thready softness. On a black plate there’s a raw chayote salad, white lengths of it mixed with flecks of green. The chayote is a pear-shaped squash with pale green skin. You see them piled high in supermarkets. Here it’s served raw with mint and roasted garlic vinaigrette. It tastes a bit like sweet spiralised kohl rabi or fennel with its aniseed flavour dialled down, the raw vegetable ying to the meaty yang of the slow cooked pig on the other plate.

We finish with a panna cotta, a smooth silken ring of it with guava jam in the centre like a dairy doughnut, and crepe crisps, which are exactly as delicious as they sound.

Critics of Noma’s Mexican pop up saw it as cultural appropriation, repackaging the food of a struggling country into an expensive culinary adventure for the one percenters. Wherever you stand on that debate Arca is part of its legacy, using spectacular local ingredients to create a wonder-filled Mexican meal. To quote the hoary old advertising slogan it’s a taste of paradise.