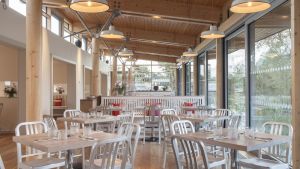 Eggs are my get-out-of-jail card, lazy woman’s dinner, passport out of takeawaytown. I can throw vegetables, herbs and onions into a hot buttered pan, add whipped eggs with cream or milk and top it with some cheese that time forgot. Instant ready meal, only cheaper, healthier and a better use of the leftovers. I love eggs, almost as much as my friend hates them. It’s a dark secret she’s choosing to share as we read down through the brunch menu in Airfield.

What? Bloody Airfield again? Have I taken up residence in a hen house there?  Bear with me. The last time I visited was for one of their evening pop ups. These are great, but pricey and occasional. In the meantime, a friend had raved so much about the daytime food I put it back on my to-do (again) list. I drove my northsider companion to the deepest southside, which was already wrenching her out of her odd-number post coded comfort zone. And now we have reached the egg impasse.

Luckily we’ve timed it right. It’s midday and the all-day brunch is now joined by the Sunday roast options. Neither chicken nor the egg have to come first here. We are having both.

Luke Matthews is the chef. After six years in London working in Michelin-starred restaurants he returned to Ireland in 2015 to open the Mews in Baltimore, west Cork, with two friends. They took an unusual approach to finding ingredients. Instead of reaching for a phone they took a hard look at what was around them, chatted to fellas in pubs and ferreted out the great stuff. The results were sensational. Mews is still there and Matthews has come to the big smoke. His locavore instincts are precisely what a café on a working farm in south Dublin needs. Some of his larder is feet from the kitchen mooing, clucking and growing on what has to be Ireland’s most valuable farmland.

The cafe is heaving when we arrive. It’s a queue, grab a number and sit down to wait for your food to be served operation. Dessert is best ordered at the same time to avoid having to queue again. It’s a bit of a faff but there is an army of extremely nice young staff to get you through it.

Brunch can be the place where chefs hit the snooze button. Eggs, cheese, something hammy or fishy and tie it all together with doorstopper slices of bread. Job done. But what could be a yawn in other hands, the Airfield “garden breakfast bowl” is a cerise pink red cabbage slaw that’s more sauerkraut than the kind of bog standard mayo slicked version of slaw. There are sprouted grains from Louth growers and millers Dunany Flour, a nutty chewy mix with crunchy clusters of popped barley. It’s a savoury granola laced with tangy dressing. There are two luscious poached eggs and long stem broccoli that tastes so good I’d put money on it being smoked before it was charred.

In a dream world Higgins’ chickens would come from a run out the back of the Áras where Michael D hand-feeds them before smoothing their feathers and tucking them in with a bedtime poetry reading. Even if their provenance isn’t quite as epic these chickens are mighty. Today a half Higgins chicken (the half that doesn’t seem to include the wing) is the Sunday roast. Juicy breast and leg come on a slump of greens, kale and chard fried with garlic. This is meat as it should be, tasting properly of chicken rather than random white protein. There are fingerling potatoes, lovely waxy yellow flesh nutty enough to barely need butter, baked at such a high heat that their skins are flayed and crisp like pork crackling.

Those desserts that we bagged with lunch haven’t suffered from sitting on the “ignored for a while” counter. There’s a great gritty blood orange polenta cake whose baker has resisted the urge to lamp in sugar by the shovel so the tang of these seasonal fruits still survives. The memory of the other dessert still makes me smile. It’s a panna cotta with rhubarb. Sounds ho hum but not when it’s made with Jersey cream from your own cows. This panna cotta has such a rich cream hue it deserves its own Farrow and Ball colour designation. Airfield Jersey Cream would grace only the poshest of woodwork. It’s creamier than a flotilla of milk tankers. They can make this dessert year-round, using whatever fruit is in season or preserved by this smart switched on kitchen. I think it might be the perfect dessert for this place.

Daytime restaurants that spend this much time and money on ingredients and sell them at cafe prices deserve to have queues like the ones at Airfield. Time your visit right and you could even meet your maker. No not the chef, but the hens that laid the eggs that visitors can see during feeding time. I might even hatch a plan to spring that on the friend next time.

Lunch for two with sparkling water and apple juice came to €43.

Food provenance: Extensive. Check out the map of Ireland chalkboard