Kids in the kitchen: new series teaches children about their food 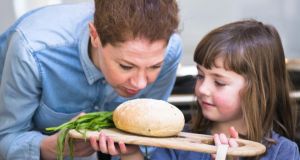 A West of Ireland mother who grew up catching, shooting and foraging for wild food is sharing her delight in finding ingredients at source and teaching her children to cook through a new series of online videos.

Cliodhna Prendergast is a 39-year-old chef who has worked in top kitchens – from the now gone Jacob’s Ladder, where she trained, to Ballymaloe, Newport Lodge and for many years, the exquisite Delphi Lodge where Prince Charles once holidayed.

But after three children came along, she wanted to find a new career that kept her in the kitchen, also got her out of the house, and involved her own children. Et voila – Breaking Eggs, the 24-part video series.

“Breaking Eggs is about getting children tactile with food; trying to foster an instinctive natural awareness of food. It’s not going to make every child eat every vegetable,” says the creator of this series, which is for parents and children to use together.

The videos feature Prendergast’s children Jake (9), Iseult (6) and Milo (4). The family live in Connemara – 10 minutes from where Prendergast grew up – on the grounds of Ballynahinch Castle Hotel where her husband, Patrick O’Flaherty, is general manager.

“You’ll see us sourcing the food on the farm, going fishing, foraging, meeting cheese producers or going to the market and connecting the food to simple family meals,” says Prendergast.

“There is something about spending time on common ground with children – they feel it’s a shared experience as much as you do,” says Prendergast, who grew up in a family-run hotel in Connemara where a succession of “girl chefs” took her under their wings. Aged 11, she was making the hotel’s ice-cream and while at UCC studying psychology and sociology, she worked in a cafe and made their tarts for “going-out money”.

“After college, I wanted to open a cafe, so my mother insisted that I learn to cook and I went to work in Jacob’s Ladder in Dublin, with Adrian Roche, who once worked in the family hotel and now happens to be my brother, Gavin Prendergast’s partner in his business, Urban Picnic.”

As a chef, Prendergast was influenced by her own upbringing where local ingredients were on the table – wild salmon and vegetables from the kitchen garden. Her childhood was spent picking wild mushrooms and nettles for the hotel chefs, helping with the kitchen garden and the sea trout fishery, going to Gowla River to fish for sea trout, harvesting scallops from the sea, catching mackerel and learning to prepare the family’s own Connemara lamb.

“In the winter, we used to have shooting groups to rough-shoot woodcock and snipe, and then the game would come in – venison as well, all indigenous. They might go out with dogs and come back with none or five – it was not a bloodfest, but we would have to pluck them and prepare them.”

This intimate relationship with food is one that the current generation and probably the generation before have no idea of, she thinks. But how do her own children handle the reality that animals are killed to feed them?

“I really feel that if you tell them from the beginning, they don’t seem to have a problem at all with it. We have pigs, hens – we will name the mummy pig but not the piglets because the children know they will be eating them at some point. Those animals wouldn’t be here if we weren’t eating them, and that’s what they are raised for.”

In the videos, Prendergast and children meet gardener Kay Sinnott, who designs kitchen gardens for schools. The children plant seeds then learn they can eat seeds with a recipe for flatbreads and dukka, which is a blend of spices and nuts.

They visit Imen McDonnell, a US-born Limerick farmer’s wife, food writer and blogger at Farmette.ie – who teaches them to milk a cow and make butter by shaking it in a jam jar in the field. Then they go home and mix the butter with nasturtium and lemon, pop it on hake, wrap it all in parchment paper to bake and have a feast.

The family catch shrimp with fisherman John Sullivan and go home to make a shrimp omelette.

“The kids got such a kick out of those producer parts of the programme – visiting Uncle Matt’s Farm in Oughterard, run by Catriona and Padraig Walshe, and baking beetroot brownies, and making the best ever tomato sauce. It was heartening to hear my son Jake say how much he enjoyed meeting the lovely people and to see their passion for what they do – their devotion to the ground that they grow on is amazing.”