It’s a feast or famine with berries, currants and cherries but making them last longer is easy 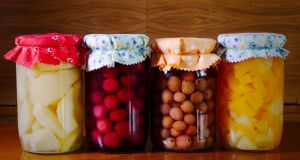 The practice of preservation took place for centuries in Ireland, mainly from necessity. We had no fridges or freezers so if we wanted to keep something beyond it’s season (or even beyond the following week) we had to preserve things. Now is the time of fruit: green gooseberries, red strawberries, orange raspberries, blue blackcurrants, red cherries. All this fruit is bursting with flavour and needs to be used (or if not used preserved). Of course, fresh strawberries and cream are delicious, but how do we make our strawberries last longer? Jam and jelly is probably the easiest way. Or you can try pickling them.

Of course, you’ll get more use from the strawberry vinegar that the actual fruit. Take 500g of strawberries, place them in a pot with 500ml of white wine vinegar, 50g of honey and 150ml of water. Bring to boil. Place in a jar for a week then strain. Keep your strawberry vinegar in the fridge.

Gooseberries are great pickled or preserved in sugar. A recent 18th-century recipe I came across, preserved them in rose water and sugar syrup. A little rose water goes a long way, but in this recipe they had five pints of rose water! Perhaps it was not as potent as the one we use in the restaurant. We probably will never know.

Raspberry vinegar was popular in the 19th century in Ireland as a flavouring for meat and fish. You have to remember that not everyone had lemons at their disposal. You can make it the same way as the strawberry one above but often I just fill a jar with raspberries and cover them with apple cider vinegar.

Fermented red currants make a beautiful dressing, something I picked up while spending two days at Copenhagen’s Noma restaurant last year. Salt the red currants with 2 per cent salt and cover with water. Ferment for about a week at room temperature and then place in the fridge. Use the red currants in a salad and their liquid as you would vinegar: 1 part red currant water to 3 parts oil. When preserving fruit, let your imagination run free.