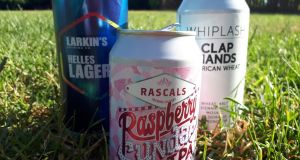 What do you do with your empty beer cans? Toss them on the grass if you’re Don Draper in that famous episode of Mad Men, where he takes his family for the perfect day out in the countryside then leaves all their rubbish behind. Though that was set in the 1960s, when the word “recycling” probably didn’t exist.

Most of us put our cans in the green bins now – maybe with a little satisfying crushing beforehand – but artist Ann Carrington has found an entirely different purpose for them, collecting thousands of flattened beer cans to make the busts of kings, queens and other very important people.

Her portraits – which include Tutankhamun and Queen Elizabeth – glint with little aluminium bits of red, silver and, in the royal portrait, a touch of green from what looks like a Brooklyn Lager can. The Noble Nobleman, a bust portrait which is part of her Piss Heads collection, is also made of crushed beer cans and you can see it at a new contemporary busts exhibition called On a Pedestal at Castletown House in Kildare (and in Dublin Castle in September).

Yes beer cans are everywhere these days – remade into art, littered at the side of the road, in your fridge or stacked on a supermarket shelf. And if you haven’t noticed, there’s even more of them on sale now, with many craft brewers switching over from bottles. Larkins, a new brewery in Kilcoole, Co Wicklow, has a 440ml Helles Lager can. This is a very easy-drinking, light and crisp lager with a touch of grainy sweetness. Rascals Raspberry Sundae IPA has lots of vanilla in the aroma and taste, with a good hit of raspberry – it’s fun and it works but might be a little sweet for some. Clap Hands is an American wheat beer by Whiplash (5.2 per cent) and I really enjoyed its lovely lemon and apricot aroma, soft body and restrained finishing bitterness.