What do you do when life gives you lemons?

Now we know: Ancient Egyptians may have to first to raise a glass of lemondade 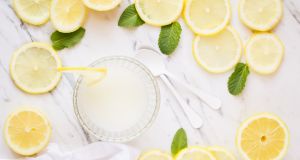 Lemonade made its way to America with the first wave of European immigrants in the 18th century where it was promoted as an alternative to alcohol.

The expression “when life gives you lemons, make lemonade” was actually found written in hieroglyphics on the wall of a pharaoh’s tomb just outside Cairo. Okay, fine, I absolutely just made that up. But many historians believe that what we know of as lemonade may have originated in Medieval Egypt, a few centuries after the great Pyramids were built.

In a 2018 study named Genomics of The Origin and Evolution of Citrus published in the science journal Nature, the researchers report that fossilised leaves found in China were about 8 million years old, thus indicating that the lemon tree is indigenous to China. According to the food historian Clifford A. Wright (www.cliffordawright.com), the first written record of the lemon tree appears in the early tenth century work of Qustus al-Rumi in his writings on farming techniques. The Persian poet and traveller Nasir-i-Khusraw locates the lemon in Egypt in his lifetime, which is believed to be from around 1003 to the 1060s.

So how did we go from lemons to lemonade? An early version, perhaps the very first iteration, of lemonade was known to Egyptians as the sugary lemon drink qatarmizat. “Although the lemon originates farther to the east, and lemonade may very well have been invented in one of the eastern countries, the earliest written evidence of lemonade comes from Egypt,” writes Wright on his website. “The trade in lemon juice was quite considerable by 1104. We know from documents in the Cairo Geniza – records of the medieval Jewish community in Cairo from the tenth through 13th centuries – that bottles of lemon juice, qatarmizat, were made with lots of sugar and consumed locally and exported.”

Other important milestones in the history of lemonade include its thriving popularity in 17th century Paris. In 1676, lemonade vendors formed their very own union known as Compagnie de Limonadiers. According to How Stuff Work (www.howstuffworks.com) the popularity of lemons in Paris at this time is attributed with quelling the effects of the Black Plague which obliterated the rest of Europe. According to historian Greg Jenner, Londoners began importing the sweet lemon juice mixed with honey and water from France by the 1660s, though “the addition of bubbles had to wait, however, until 1767, when English chemist Joseph Priestley invented carbonated water, a technique exploited by Johann Jacob Schweppe, whose commercial drinks company began selling fizzy soda in England in the 1790s”.

Lemonade made its way to America with the first wave of European immigrants in the 18th century where it was promoted as an alternative to alcohol and its popularity bolstered by the travelling circus culture of the 19th century. Arguably the next most significant thing to happen in the history lemonade was Beyoncé, which brings us up to date with this most delicious of summer drinks.