Pearl Brasserie: A traditional occasion restaurant without the heart-attack bill

Review: Proper old-fashioned word of mouth brought me to a Dublin favourite – and it is a gem 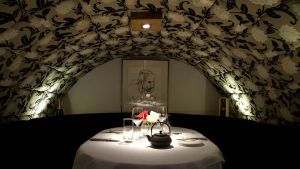 My “it’s not me it’s you” break up with Twitter came when I thought about sharing a platform with the world’s biggest troll. Those Trump race-hate retweets took all the fun out of it. That and the nagging feeling Twitter was using me rather than the other way round. Slowly we’re finding out those pleasure points of likes and retweets were engineered deliberately by some of the smartest psychology brains on the planet: serfdom with added endorphins. They made it all so enjoyably addictive, damn them, all that tedious, stressful unpaid labour.

So now my food news comes from reading newspapers and having conversations with people. Yes this makes me sound older than time and out of the shiny, funny, maddening scrolling endlessness. But it turns out the fear of missing something is less than the fear of being overwhelmed by everything.

One of those real world conversations has sent me here to a basement that hadn’t blipped my radar until a well-travelled man told me how disappointing he’d found a very expensive dinner in a well-known restaurant. He would have had a better night, he said, in Pearl Brasserie.

Pearl is down some steps nearly opposite Government Buildings in the vaulted basement of a Georgian terrace on Merrion Street. It has the feel of a workaday business restaurant, open on a Monday and priced for people who are paying their own bills rather than whacking it on the company Visa.

Inside it seems unchanged since its opening (or unselfconsciously retro depending on how you look at it). Tables are swathed in white linen and the chairs have arms and padding. There’s a fish tank set into the wall, a repointed old stone wall showing the heft of what went into the foundation of the old brick building above our heads.  It’s a place of nooks and crannies. Several tables are set into upholstered vaults not much bigger than MRI machines, padding on their curved ceilings to prevent post-dessert concussion.

My friend is sitting at a large table in the main room where you can see the legs of people going by up at street level beyond the window. The set lunch in Pearl is a mix of the expected and the not so predictable ideas borrowed from food cultures further afield than your classic brasserie-land.

Lamb shoulder is not a typical starter ingredient but here it’s pressed and rolled into spicy lusciousness and two small portions are served on a disc of cous cous, studded with well-chopped spring onions and a juicy yellow raisin or two. There’s a “spicy jus” that is more glistening broth than gravy, poured on after it arrives at the table. The whole thing is a combination of lightness and heft. My friend has the crab meat, a tall tian topped with a cucumber slice of sweet thready meat islanded in the middle of a tomato gazpacho that is pure Mediterranean holiday in food form. There’s a small warm note of chilli threading through the essence of tomato sweetness. Cubes of compressed water melon take it to sunnier levels again.

Her salmon is also light and deftly done. A luscious slab of organic fish with crisp skin sits in a dashi with spinach, cucumber and small clumps of spicy tofu that look and eat a little like tempura oysters. I break an unwritten rule against too much fish and order the sea bream (the other dishes sound too heavy for a summer’s day). The fish is good, expertly cooked and served with carrots, a cardamom puree that’s subtle and some strips of yellow “heritage” carrots that look great but aren’t particularly carroty. Plump capers round it all together with an astringent flick of the wrist.

The dessert is a tartlet and might be one of my favourite things about Pearl. It’s a perfect size, enough creamy sooty chocolate sauce in a pastry case with hazelnuts to satisfy a sweet tooth craving without sending you slumped into the territory of too much. There’s ice-cream made with white chocolate and yuzu, the Japanese citrus fruit that hovers deliciously between sour orange and lime. A perfect espresso with petit fours feature a pistachio financier the size of a swollen button that’s another sign of a talented pastry section in the kitchen.

So the hot-off-the-presses news folks is that Pearl Brasserie is well worth a revisit. It’s the right mix of fresh ideas in a proper traditional occasion restaurant, heart warming without the coronary when the bill arrives.

Lunch for two with a glass of wine, coffee and a shared dessert came to €76.50.