JP McMahon: Make the most of our traditional river fish 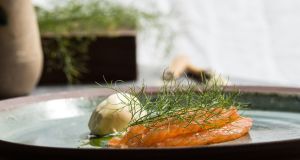 Over the centuries rivers played an important role as a food source for Irish people. From the first early Irish settlers to today’s anglers, these same rivers still provide us with food. Most of our early settlements and subsequent towns were built around rivers, whether at its mouth or along it. This allowed communities to have a constant source of food from the river fish. Along with wild salmon and the brown trout, eel provided sustenance to the earliest inhabitants of Ireland.

For me, these are the three central river fish that are tied to the Irish food story. Of course, today, most people fish for fun and we no longer rely on our rivers as we once did. However, eating river fish is a great way of stepping back in time.

Because wild salmon is hard to come by, I always love when I manage to secure a fish or two. Curing the fish is a great way to get the most out of it in terms of its servings. It’s also super easy to do at home.

1. Brush the salmon with the beer.
2. Mix the fennel seeds with the sugar, salt and chopped fennel.
3. Lay a layer of the curing mixture on a flat tray and then place then skin side of the salmon over the layer. Cover the salmon with the remaining mixture.
4. Cover with cling film and place in the fridge.
5. Cure for 48 hours.
6. After the salmon is cured, rinse and return to the fridge for another 24 hours to dry.
7. Slice thinly and serve with the sour cream and fresh fennel.

We never really think about eating salmon raw, which is an awful shame. For this recipe I combine the raw salmon with pickled elderflower. Elderflower are abundant every June, July and some of August so get out and find some. Preserving them in vinegar is a great way of keeping them for the year. Though strawberries and raw salmon seem like unlikely partners, they work wonderfully together.

Smoked eel with potatoes and buttermilk

Archaeologists have found evidence of eel fishing dating back to the Bronze Age. In ancient times, the most efficient way of fishing for eel would have been trapping, using stationary wooden fish traps, at the mouth of freshwater streams, during their migration into the sea.

Eel could also be caught using a three-pronged spear. In the middle ages, eel was a source of protein for the poor. Eel weirs were established and though eel consumption has declined, Lough Neagh, in Northern Ireland, is the home of the largest wild caught eel fishery in Europe. Eel fishing has been a major industry on the lough for centuries.

Since the 1960, Lough Neagh Fishermen’s Co-operative have the rights to manage the fishery. It now manages the production of around 400 tonnes of eels annually and exports internationally. The eel is brined and then smoked traditionally. I find it unfortunate that most people do not want to engage with eel nowadays.

No doubt this is due to it receiving poor treatment in their childhood: overcooked and tasteless. Boiled eel in a heavy white sauce does not sound very appetising in the least. Eel was also associated with poverty (as was most fish). It is time we re-evaluate our attitude to eel. Though eel stocks are low and most commercial fishing in not allowed, this is no reason not to try it. Smoked eel is a really delicacy and a proper product and taste tied to Irish history.

1. Boil the potatoes in salted water until tender and then strain. Melt the butter in the pot. When it starts to foam, toss the potatoes through it. Season with sea salt.
2. Combine the cream and the eel and warm. Add the bloomed gelatine. Remove from the heat and allow to infuse for 15 minutes. Blend with a hand blender and strain through a fine sieve. Add the buttermilk. Season to taste. Pour into a siphon gun and charge twice. Keep warm.
3. Dry the parsley in a 50 oven for 4-6 hours. Blend and sieve and place in a sugar sifter.
4. To serve: divide the potatoes onto four warm plates. Cover with the eel foam and garnish with some parsley powder.

Brown trout with leeks and cider

The brown trout (Salmo trutta) or Breac Donn (Gaelic) is a native Irish species of freshwater fish. It’s probably the most common river fish that is eaten in Ireland. I think the medium sized fish are best for cooking. In this recipe I use cider and lovage. Lovage is a herb related to celery. It has a similar taste. If you can’t locate it, you can use flat-leaf parsley instead.

1. Preheat the oven at 180 degrees C
2. To cook the fish: make a few diagonal incisions on each side of the fish. This will help with the cooking. Season the fish with sea salt. Stuff the belly of the fish with some of the lovage. Slice the leeks into 2cm rounds and place upright on a large baking tray. Cube the butter and dot around the leeks. Place the rest of the lovage on top of the leeks. Place the fish on top of the leeks.
3. Pour the cider over the fish.
4. Bake the fish for 20 minutes, basting occasionally. Allow to rest for 5 minutes before serving.
5. To serve: Place the fish and the leeks on a large serving platter. Blend the sauce with a hand blender. Spoon the sauce over both.