Rachel Khoo: A culinary journey from France to Sweden 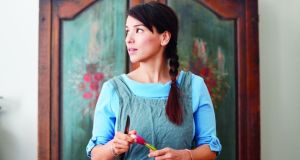 Rachel Khoo: ‘When I decided to write a Swedish cookbook, I asked myself what would make my book different from those that were already out there. It’s my personal story, my approach to food.’

Rachel Khoo is perhaps most often thought of as the pretty young English girl on the BBC 2 food show, filmed shopping at picturesque French food markets, multi-tasking in her postage stamp kitchen, and feeding strangers at a minuscule table for two in her tiny Paris apartment.

But the Central St Martins art and design graduate and Le Cordon Bleu-trained pâtissière has moved on from the French capital, where she sprung to fame as a cookbook author and TV presenter on the strength of her debut, The Little Paris Kitchen. You’ll now find her living, and cooking and writing about it, in Stockholm, where she lives with her husband, Robert, and their 18-month old son.

“My cookbooks are like a personal journey for me, they’re like a chapter in my life. When I decided to write a Swedish cookbook, I asked myself what would make my book different from those that were already out there. It’s my personal story, my approach to food.”

Since moving to Stockholm, she has been learning the language, her fourth, after English, German and French, and immersing herself in the Swedish way of life. “I really enjoy the process of discovering a new culture through food. I think it’s a great way to be able to do it, and such a social way because people love to talk about food.”

For the book, she has been mining her new Swedish family and friends for favourite recipes and childhood food memories, and exploring the world of husmanskost, which she says translates as “houseman’s food”, or traditional home-cooked food.

This is far removed from the groundbreaking, experimental nature of what has come to be known as New Nordic Cuisine, on which the region’s culinary credentials are built. But it shares the same principles of making the most of what’s available (in a relatively remote geographical location with a short growing season), and making it last longer by preserving, pickling and smoking.

The higher end of the Swedish gastronomic scale is something she also got to experience, back in 2012, before she had any notion of writing a book about Swedish food, when she spent a couple of weeks working at Fäviken, Magnus Nilsson’s Michelin two-star on a remote estate 750km north of Stockholm.

“It was just after the TV show of The Little Paris Kitchen had come out and everything kind of blew up and I was like, you know what, I really want to experience something different. I want to push myself. I’m always up for a challenge. I was washing dishes, and cleaning the toilet at some point, but at the same time it was such an amazing experience to work in a kitchen like that and to experience Swedish nature and that style of cooking.”

Khoo has been struck by the similarities between the new culinary language she has been learning, and the food of her upbringing in the UK, where she lived with her Malaysian Chinese father and Austrian mother.

“It’s very familiar . . . you’re not going to have to go and buy a whole new larder full of exotic spices and ingredients; most of the things you’ll already have. And that’s what I like about it, it’s quite simple in that way, and that’s quite modern.”

She says that one of the things that surprised her in her research was “the discovery that you can be creative with very little ingredients”.

Another is the Swedish love affair with the humble spud. “Sweden endured a potato famine like in Ireland and loads of people emigrated to the US. There are a lot of potatoes in Swedish food. They love their potatoes in all forms, they even put potato puree on their hotdogs. You can order a hot dog that has the frankfurter in it, then you have mustard or ketchup, then potato puree and deep fried crunchy onions.”

Khoo says that working with a limited range of ingredients means, “you have to push your creativity”. But mash on a hot dog? That just might be creativity overload. Or not.

There are a couple of days in the Swedish year when the mercury in the thermometer hits temperatures that could compete with a warm summer day in southern Europe. And, on those days, nothing beats a refreshing chilled soup.

Method
1. Start by making a granita. Blitz the cooked beetroot with the yoghurt in a blender. Pour into a large, flat-bottomed container and place in the freezer. After 30 minutes, thoroughly stir through the mixture. Place back in the freezer for another 2-3 hours, or until fully frozen.
2. Meanwhile, blitz the cucumber and dill in a blender until very smooth. Add the vinegar and season to taste with salt. Place in the fridge to chill.
3. When ready to serve, julienne the remaining beetroot into thin strips. Use a fork to scratch the granita up into snow. Check the soup for seasoning, then divide it into bowls. Top with the granita, some beetroot matchsticks and the sprigs of dill.
Top tip: The colder a dish, the more you need to season it. Freezing dulls the taste and, therefore, extra seasoning is required.
Get ahead: The soup will keep for a day in the fridge. The granita will keep for a week in the freezer in an airtight container. Take out of the freezer five minutes before serving to make it easier to fork up the crystals.

These tennis-ball-sized potato dumplings are the Björn Borg of the dumpling world. They are old-school champions, and can be boiled or fried, filled or unfilled (and differ in other ways, depending on which regional variety you make: Smålandska dumplings sink when they are initially boiled and rise to the top when they are finished, whereas those from Öland, an island off the east coast of Sweden, do the opposite).

Peas aren’t usually added, but I like the way they give the otherwise grey-looking dumpling a lovely green pop. I’ve skipped the filling in this recipe, instead piling them high with a salty, sweet and spicy topping.

Method
1. Fill a large saucepan with cold salted water and peel the potatoes. Put the potatoes in the pan, bring to the boil and simmer for 15 minutes or until tender, then drain and leave to cool slightly.
2. Meanwhile, put the frozen peas into another pan with 1 tablespoon of water. Cover and cook for about 2 minutes, until just tender. Drain and blend to a smooth paste in a food processor.
3. Finely grate the potatoes, then mix with a pinch of salt, the blitzed peas and eggs. Add the nutmeg and 300g of the flour and stir to combine, adding more flour only if you need it – the dough should be firm.
4. Bring a large pot of water to the boil with a generous pinch of salt. While it’s coming to the boil, roll the dough into a long sausage and cut into 12 equal pieces, then roll each one into a ball.
5. Next, make the topping: put the butter into a large frying pan over a medium heat and add the spices, bacon and onion, cooking until the onion is crisp and golden. While the bacon and onion are frying, add the dumplings to the boiling water and cook for 5-10 minutes, or until they are firm but bounce back when touched. If you are unsure, cut one open: the dumpling should be cooked and hot all the way through.
6. Serve immediately with a generous heap of the topping, a sprinkle of chopped chives and some sugared lingonberries or lingonberry jam, if you have them.
Get ahead: The dumplings can be frozen after they’ve been boiled. Plunge into boiling water to defrost and reheat.

This is another Swedish comfort food classic, but one you’re unlikely to see served outside of work canteens or someone’s home. It’s usually served with rice, but I like to serve mine with pasta and add a few (elderberry) capers to the sauce for a bit of a kick.

Method
1. Bring a large pan of salted water to the boil for the tagliatelle or pappardelle.
2. Put the butter, onion and sausage into a large pan. Fry, stirring occasionally, until the sausage and onion are golden. Add the tomato puree, mustard, paprika and cream, continuing to stir so the flavours mingle, and simmer gently for five minutes. Taste for seasoning and adjust to taste.
3. Add the pasta to the pan of boiling water. Cook for seven minutes (or according to packet instructions). Drain the pasta, reserving a small mugful (around 80ml) of pasta water. Add the mug of pasta water to the sausage sauce. Stir in with the capers and take off the heat. Toss the pasta in the sauce until well coated, and sprinkle over the chives. Serve immediately.
Get ahead: The sauce can be made the day before (just don’t add the chives at this stage) and then warmed up gently when you need it. You can also freeze the sauce in an airtight container for up to a month. Simply add the pasta water as stated above just before serving, and cook the pasta fresh.