Top honours claimed by 25 Irish made products in a blind taste competition that received almost 13,000 entries 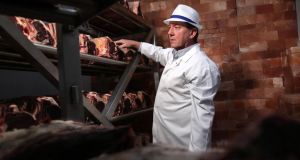 Irish food producers have again performed strongly in the Great Taste Awards, with a total of 25 products being awarded three-stars, the highest honour, at the UK and Ireland industry event run by the Guild of Fine Food.

The awards have been running for 24 years and  attracted almost 13,000 entries competing to be named the best food products in the UK and Ireland.

The Republic of Ireland claimed 10 three-stars, while a further 15 were awarded to food produced in Northern Ireland

More than 500 judges took part in 65 judging days, from March through to early July, to select the finalists. The supreme champion, a title which has been claimed by Irish food producers for each of the past three years, will be announced next month at a gala dinner in London.

A total of 192 of the 12,634 products submitted for judging were awarded three stars, 25 of them from Ireland. Awards were also made at two-star and one-star level, including five for meat products from James Whelan Butchers, a former winner of the supreme award in 2015.

The village of Ballyhoura in Co Limerick appears twice among the 10 three-star winners from the Republic. Ballyhoura Mountain Mushrooms triumphed for their mushroom salt, and Ballyhoura Apple Farm were successful with their Apple Chai Shrub, a sweet drinking  vinegar made with apple juice, spices,  cider vinegar and honey.

Peter Hannan of Hannan Meats in Moira, Co Down,  the only producer ever to win the supreme championship title at these awards on two occasions, was awarded three stars for four of his meat products this year - salt-aged lamb striploin, lamb bacon, and two varieties of burger.