Aperol spritz: how a Venetian aperitif became the drink of the summer 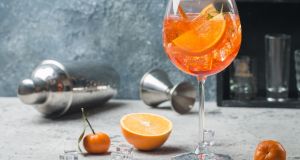 The story goes that Austrian soldiers didn’t like Venetian wines, so they took to adding soda water to punch up their acidity. So ‘spritz’ derives from the German word spritzer, ‘to spray’

It took Russell Norman a glass or two of wine to ask what the locals were drinking. This was Venice in the mid-00s and, in the city’s back-street bars such as Caffe Rosso and All’Arco, Norman kept noticing big drinks glowing orange or red. These were Aperol or Campari spritzes, he was told, an assemblage of those tangy apéritifs, local white wine and “seltz” (soda water), garnished with lemon and an olive.

Though he didn’t know it then, Norman was researching what would become his first restaurant, Polpo – now a small chain of Venetian-inspired eateries – and when it came to opening in 2009, he needed a signature drink. “We were a regional restaurant, and the spritz seemed an important hallmark of what we were trying to do.” Unsure whether punters would take to them – “Aperol was a complete unknown, Campari was a bit naff ” – Polpo gave away spritzes when people walked in. They went down a storm.

Fast-forward to today and spritzes have moved from obscurity to ubiquity. In the UK, Sainsbury’s reports Aperol sales are up 38 per cent year-on-year and Campari 16 per cent, while Norman says that, between its six sites, Polpo has been shifting between 1,500 and 2,000 spritzes a week during the heatwave, “and one-third of those from our smallest restaurant, a 40-seater on Chelsea’s Duke of York Square: we’re seeing a direct correlation between sitting outside and drinking spritz”.

Why the surge in popularity? Partly, it is marketing. Grupo Campari, which owns Campari and Aperol, has funnelled giant budgets into the latter especially, which included a sponsorship deal with Manchester United in 2014; promotional accessories; and a roster of events including the Aperol Spritz Social in east London in June – not just two spritzes and a few bites for a tenner but also an Aperol-hued canal with rowing boats and a carousel of lurid orange Vespas. Low-key, then.

In the mainstream, spritz drinkers fall into two camps: the orange and the red. More successful is Aperol, the Serena Williams to Campari’s Venus, although the Williams analogy ends there because Campari is significantly stronger (25 per cent to Aperol’s 11 per cent).

Aperol’s modest ABV may well be key to its popularity, tapping into a trend toward lower-alcohol drinks, particularly among young people. Served over ice in a large glass and topped up generously with soda, the spritz’s appeal to that growing breed of moderate millennial is easy to understand. It is, as chef and Campari devotee Jeremy Lee puts it, “a thirst quencher with a gentle canter attached”.

There is no doubting that the Aperol spritz is Instagram gold. Search the #spritz hashtag and your screen will be awash with lurid orange drinks alongside similarly orange millennials, spritz tattoos and spritz merchandise. Ex-Made In Chelsea star Millie Mackintosh and actor Benedict Cumberbatch are both fans of the drink, while it’s arguable that Donald Trump even shares genetic material with it.

The definition of a spritz varies depending on where you are. In essence, says Kay Plunkett-Hogge, the author of Aperitivo: Drinks and Snacks for the Dolce Vita, it’s a drink of white wine, soda and Italian bitter liqueur over ice – “I favour one part of each” – and can be traced back to the mid-19th century, when Venice (or Lombardy-Venetia) was part of the Austrian empire.

“The story goes that Austrian soldiers didn’t much like the local wines, so they took to adding soda water to punch up their acidity. So ‘spritz’ derives from the German word spritzer, ‘to spray’.”

In other wealthy north Italian cities such as Milan and Turin, where pre-dinner aperitivo culture is deeply embedded, prosecco and an orange slice replace the white wine and olive of Venice. This is the style favoured in Ireland and, personally, I’ve always thought Campari or Aperol to be a handy weapon for masking cheap sparkling wine. Ironically, then, for something so adored for its taste today, the spritz’s roots lie in hiding certain flavours rather than celebrating them.

A combination of spritz fever and the steady march of lower-alcohol drinks has prompted large wine producers to launch their own ready-mixed versions. Gallo Vineyards Spritz (pineapple and passionfruit with a pinot grigio base, or raspberry and lime with a grenache rosé base) is 5.5% ABV – which was reportedly developed for 22- to 30-year-old female drinkers – while, at 8.5% and flavoured with blood oranges, Jacob’s Creek Aperitivo Spritz is perhaps an iota more sophisticated. Nonetheless, both, not to mention the Barefoot , Blossom Hill and Echo Falls equivalents, all seem to miss the point, excluding the bitter component, which is surely the very essence of a spritz.

How to spritz this summer

All in a tumbler filled with ice ...

A squeeze of grapefruit

Garnish with another slice of grapefruit

Garnish with celery leaves or cucumber

Garnish with a slice of lemon

Garnish with a slice of lemon