Vietnom: Some of the best street food in Dublin

Review: This tiny eatery is dishing up fresh, tasty food from an unlikely pub setting 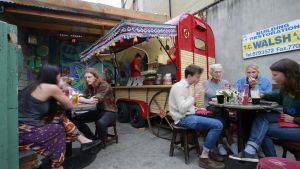 The Glimmer Man pub in Dublin’s Stoneybatter looks like it dug in deep and let reinvention wash past its door. The huge roomy old building probably took refugees escaping hipster creep when neighbouring L Mulligan Grocer gastrofied itself into new life. A walk through the Glimmer Man’s vastness is a reminder of how pubs used to look, smell and feel with added big screen TVs. But now food is happening here, or at least out the back.

There’s a converted horsebox in the corner of what they call a beer garden. We’re not talking Bloom here, folks. This would more accurately be described as a beer yard. There’s a clematis and some potted specimens but the dominant form of plant life is the tobacco in the fag ends in the ashtrays. These are on the rickety tables, surrounded by breeze block walls, some of them under a plastic half roof that no amount of Mayfair Instagram filtering could massage into something beautiful. There are supermarket delivery boxes of timber under seats, as if someone’s stockpiling builders’ offcuts for the fires to ward off the zombie apocalypse. The crowd is a mix of smokers, heavy metal fans, (there’ll be music later as part of the Stoneybatter festival) and a sprinkling of people who are here to eat.

The summer has smiled on this nimble little street food operation

That red horsebox has a tassel-decorated awning and a bamboo cladding in a sort of Shergar meets Saigon look that would be hokey if it wasn’t for the delicious smells coming from the tiny kitchen inside. The horsebox is Vietnom, a Vietnamese street food operation run by chef Milly Murphy and Alex Gurnee. They’ve been parked in the back yard of the Glimmer Man since earlier this year. They grow some of their own ingredients and order McNally Family Farm vegetables when they need to fill a gap. That idea alone is enough to get me here.

Too many Vietnamese operations (street or otherwise) wrap the sweet, sour, fiery and salty flavours of the food culture around battery meat and watery veg. When someone starts at the other end of the telescope with proper ingredients their food stall is where I want to spend my time even if it’s in a smokers’ yard with loud music.

You order at the counter, take a number and wait till it comes up (tax office stye) on a digital read-out which you can’t see if you’re tucked in to back of the wall, like we are. We peer round the corner occasionally in between trips to the bar for drinks. You collect your food takeaway style in food boxes but they’re soft combustable card instead of nasty plastic.

Packed into those boxes are crispy fresh baguettes or banh mi, without the meat. Instead they contain the kinds of flavours that make meat-free a pleasure rather than than penance. A sandwich with honeyed mushrooms and crispy peanut shallots is also stuffed with fresh soft vegetables some of them pickled and others just folded into the depths of the great sourdough bread. There’s a teriyaki paneer, an orange cheese-like layer that’s tastier than the plastic ham you’ll find in lesser sandwiches. A sriracha mayonnaise is made with just enough chilli heat to keep things interesting. There’s a tostada with crispy potatoes and rainbow chard, stems sweet and juicy along with the excellent spuds. There’s an “organic summer roll” that I’m planning to eat again very soon. It’s a cabbage leaf soft and green with freshness wrapping carrot miso, more of that paneer and a mild sweet kimchi. It’s a texture and flavour bonanza and probably the best street food I’ve eaten in Dublin. We’ve ordered all but one of the dishes on the menu and the food bill comes to €30.

The summer has smiled on this nimble little street food operation. They couldn’t have chosen a better year to park up in this corner of the northside. As the temperature drops it’ll be interesting to see where Vietnom goes. I’d like to taste their take on pho. If they can make banh mi this delicious that’ll be something worth a trip. Dinner with drinks came to €38

Music: Depends on the night

Food provenance: McNallys for the vegetables

Vegetarian options: It’s all there is

We lived what began to feel like the same day on repeat in Enniscrone, Co Sligo for a spell last month. Breakfast, surf, lunch, beach were all rounded off with a pier jump. It was a day that needed ample carbs and an afternoon trip for sweets in Milo’s. But before the routine got too entrenched we took our annual trip to Pudding Row in nearby Easkey. Dervla James and her all-woman team were bearing up well under the heat and the food showed no sign of wilting. (I think the heatwave put extra springiness into the house bagels). I had a brilliant plate of flowers, leaves and pickled beets topped with a polenta dusted round of feathery goats’ cheese, served with a ruby red glass of Pudding Row lemonade. We even got the insider info on Poll Gorm, the swimming hole near Easkey where determined locals dammed the tide to create a tidal pool in the 1960s. We never made it there for a swim. Next year definitely. Pudding Row, Easkey, Co Sligo.