Half a loaf of bread better than none at all? 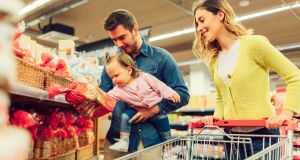 If you want to get a nutritious loaf, look for one with plenty of wholemeal flour listed in the ingredients

What’s in a loaf of bread? Flour, milk, butter, a pinch of salt and maybe even some yeast. That’s probably the case if you make it yourself, but take a look at the ingredients in the popular breads on sale today and you might be in for a surprise.

Bread, we are told, is a good source of B vitamins and high in fibre. So let’s look at Brennans Sliced White Pan (800g), which sells for about €1.50.

Ingredients are always listed in descending order by weight when the bread was being prepared. So wheat flour is up first, with the ingredients used in making it listed in brackets. So, the label shows us that this wheat flour is made from wheat, with added calcium carbonate, iron, thiamin (aka vitamin B1) and niacin (vitamin B3). When the wheat was processed to make this flour, the grain and bran were extracted. That’s where the nutrition is found, so manufacturers put some nutrients back in. So there are B vitamins listed – as they were added by a food company.

If you want to get a nutritious loaf, look for one with plenty of wholemeal flour listed in the ingredients. Seeing it listed on the front is not enough, as it may not make up a high percentage of the ingredients. Turn the product over.

The words in bold type – wheat and soya – indicate that those are common allergens. Soya is popping up in all kinds of products now, such as chocolate, often because it is inexpensive. Bakers use it because it improves the handling of the dough, gives it better volume and softness.

E472e, which as it says is an emulsifier, binds together and disperses water and oil evenly through the bread. It also gives stability, texture and helps the taste. Ascorbic acid is added to protect the colour and nutrient content. Palm oil is used rather than butter or milk. It is cheap, though if it does not say it is from a sustainable source, it is unlikely to be.

A different prospect is a bread made using a good percentage of wholemeal flour.

The packaging says it is “yeast-free, no added sugar, low in fat”, which is tuning in to popular concerns. It could say it is high in fibre too as it has 6.5g per 100g. Maybe it will in future as dieticians are keen to make people aware that about 80 per cent of Irish people do not get enough fibre. If you are one of those people, then it’s worth considering checking the level of fibre on the label.

What’s not on labels is interesting too. Enzymes used in the processing of bread do not have to be listed on the label, though some bakers in the UK have expressed concern that it means we do not really know what we are getting.

There are strict rules and regulations to make sure that there is nothing wrong with any of the breads in our supermarkets, but some are more nutritious than others.

So read the labels and make up your own mind.