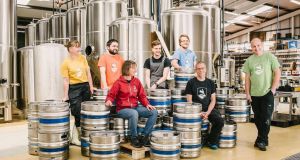 Kinnegar brewery founder Rick LeVert (middle) and his team at their brewhouse in Donegal. LeVert believes the misconception that craft beer is high in alcohol is a barrier to the industry

Craft beer is strong in alcohol – or so the general perception goes. It’s a bit of a problem for the industry, believes Rick LeVert of Kinnegar brewery in Donegal. If someone is offered a craft beer “they think it’s high in alcohol… and that’s a barrier to the sector”.

It is mostly niche craft beers, however, like double IPAs and imperial stouts, that have higher alcohol content. Many of Kinnegar’s core range of beers, like their Yannaroddy porter and Limeburner pale ale, are under 5 per cent ABV.

“We want to keep our beers accessible – so that you can have two or three and not feel as though you’ve been blindsided,” he says. “We’re not trying to put beer drinkers to the test.”

LeVert was born outside Boston and has lived in Ireland for the past 20 years. “Our beers are a combination of American, continental and Irish influences,” he says. Kinnegar’s Scraggy Bay and Crossroads IPAs, for example, are American in style with a strong hoppy character.

They are naturally carbonated, however, which is a method more associated with Belgian traditions. The use of local ingredients, such as gooseberries and apple juice in some recipes, keep Kinnegar beers close to their Irish roots.

It’s been a busy few years for the Donegal brewery, which was set up in 2013. Last year they moved to a larger 35-hectolitre brewhouse and now have a team of 12 people. In 2018 they’ll be rolling out more specials in their lager and sours series, and brewing a new session Belgian saison. They’ll continue with their rye “Bucket” beers, one of which was inspired by a “trusty Irish terrier” called Rusty who kicked the bucket.

Kinnegar now exports to Italy, the United States and the United Kingdom but the focus is mostly on the home market. “A small brewery is only as strong as its domestic demand,” LeVert says. “We’re a Donegal brewery, but local across Ireland.”

Why we need to talk about deprescribing
9