Daunted by that pile of healthy food you bought last weekend? Here are nine ways to use it up 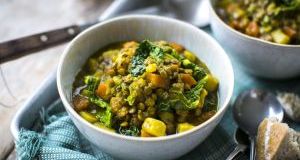 The “holiday” mood has most definitely passed, and for many of us, the new year will have seen us fill our trolleys with vegetables, pulses and grains, fuelling our good intentions and keeping our expenditure at a manageable level in what can often seem like the longest month of the year.

But how often do we load the colourful cornucopia into the fridge, basking in the feel good moment ... only discard a bundle of wilting and withered specimens at the end of the week?

A straw poll of colleagues revealed that bagged salad leaves, aubergines and cabbages (“they’re too big, I use one half and end up throwing the rest away”), are the vegetables that most often hit the bin.

So, let’s just not buy anymore bagged salads. Food writer and campaigner Joanna Blythman would approve; she has called the practice of buying salad bags “an exercise in self-harm on a national scale”.

Surplus cabbage can be turned into a sturdy slaw that will sit happily in a lunchbox without disintegrating, or shredded into a warming minestrone soup.

And if we fall for the aubergine’s jewel colour and alluring shine, we at least owe it the respect of a tasty end. Garrett Fitzgerald’s The Brother Hubbard Cookbook, with recipes from the Dublin cafes, or anything by Yotam Ottolenghi, are where I usually go for aubergine inspiration.

Otherwise, roast the offender in a very hot oven, or better still directly on a gas hob, until is it blackened and charred. Scoop out the creamy soft flesh and mix with olive oil, lemon juice, natural yoghurt and salt, to taste, for a versatile dip/spread or dressing (depending on how much liquid you add to it).

Here are some wallet-friendly, healthy and warming recipe ideas to fill tummies, empty fridges, and make the most of your store cupboard ingredients. There are some lunchbox favourites among them too.

Clear out the fridge soups

Donal Skehan says his turmeric, winter roots, cabbage and lentil soup is “an ideal dish to make when your fridge is in need of a clear out”. That’s that half cabbage accounted for, and turmeric’s health benefits are a January blessing too.

Or, you could save the surplus brassica for Lilly Higgins’s ribollita, a hearty Italian classic which she makes a touch more luxurious with the addition of Parmesan toasts.

But the empty-the-fridge recipe that I most often find myself using is Higgins’s butternut squash and coconut soup. Those hardly specimens can survive for a scary long time. But eventually they’ll guilt-trip you into using them, and this silky, luxurious soup is a good way to use one up. You’ll also find, in the link, the writer’s excellent tips on how to tell a good can of coconut milk from a less good one.

Pasta is often the busy cook’s fallback, but we can make it a healthier and heartier choice by using wholegrain or buckwheat varieties rather than those made with refined white flour. Domini Kemp’s buckwheat noodles with black pudding, shiitake and bok choi could be adapted with any sort of common or garden mushrooms, and kale or cabbage if you don’t have bok choi.

The same writer’s wholewheat penne with yoghurt, basil and mozzarella uses a lot of storecupboard ingredients, combined with a bit of supermarket dairy produce.

Vanessa Greenwood’s spinach, Mediterranean vegetable, chickpea and smoked paprika lasagne is more of a weekend treat, but will make great inroads in your vegetable drawer. You can also use wholewheat pasta sheets to make this healthy version of a family favourite.

If you’ve subscribed to a veg box delivery scheme, chances are you’ll be finding a gnarly celeriac hidden in the depths. This root veg makes an excellent bake, and for bonus points Domini Kemp manages to incorporate a double bunch of kale into her baked celeriac gratin too.

Lilly Higgins calls on one of her favourite vegetable again for butternut squash with apple and thyme gratin.

In this root vegetable gratin, turnip, celeriac and swede are doused in cream and creme fraiche, and topped with cheese.

Who said January had to be all about denial?