Around the world in 52 meals 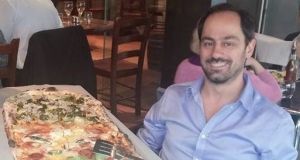 Davide Corradi spent a year sampling 52 different national cuisines in London, where he is based, beginning with Italian.

Davide Corradi, Global SEO Manager with Expedia in London, set himself a suitably international project last year. The Italian, who has been living in the UK for the past 11 years, decided to eat at 52 restaurants, one for every week of the year, each serving a different national cuisine.

Some 49 dinners and three lunches later, he completed his personal challenge with a British pub lunch at Spaniards Inn in Hampstead on December 30th. The meals were not consumed on a weekly basis . “I took holidays and sometimes I had to travel for work. I was way behind my schedule at certain point, but I managed to catch up in November and December ,” he says.

“It all started last year when, talking to a friend, I was complaining about always going to the same places in the same parts of my beloved London. I needed to find a reason to explore the city I’ve been living in for the last seven years. So this became my 2017 new year resolution,” Corradi says.

“Last January I made a list of 60-70 possible cuisines. On a weekly basis I chose one of them, depending on the availability of my guests. The idea was to eat with people from that country. That wasn’t always possible, but in lots of cases I went with ‘local experts’.”

Corradi’s list included Tibetan, Iraqi, Burmese and Palestinian. So were some cuisines more difficult than others to track down?

“Not really, there is so much choice in London. The difficult part was to choose what restaurant to go from the very popular cuisines. For example, there are so many Vietnamese, Chinese and of course British restaurants in London. In lots of cases, I followed recommendations from colleagues or friends coming from that specific country.”

There isn’t an Irish entry in Corradi’s list. Why is that? “Actually Irish has proved to be a difficult one. There are tons of Irish pubs serving great food in London, but are there any serving real Irish food? Let me know and I’ll try it. I am planning to continue eating my way through all the cuisines I can find here in London. I reckon there are 20-30 more to be tasted.”

Corradi documented his challenge on his blog cuisinesoflondon.com, noting who his guests were on each occasion, where and what they ate, and the total bill, as well as a short review. He financed the project himself, and the bill in each case was split equally between those present.

“I haven’t done the maths, but I don’t really care about how much I spent. I truly enjoyed doing it and you got to eat anyway, right?”

He says the most expensive meal of the year was probably Russian (at Mari Vanna in Knightsbridge) – “because we went hard with the vodkas”.

The best value were Portuguese (A Toca in Wandsworth Road), Turkish (Gökyüzü in Harringay) and Filipino (Lutong Pinoy in Earls Court).

Those he enjoyed the most were Austrian (Fischers in Marylebone), Persian (Colbeh Restaurant in Paddington) and Sri Lankan (Hoppers in Soho).

The 52 cuisines Davide Corradi sampled in London in 2017: