Now we know: Why do leftovers taste so good?

It’s all down to chemical reactions between ingredients, which continue after cooking stops, say food scientists 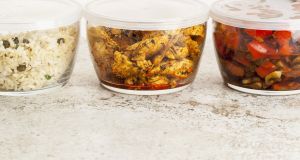 “Whether it’s a pot of potato and leek soup, a paprika-spiced goulash or a turmeric and mustard seed curry, there is a certain stable of leftovers that really do improve with age.” Photograph: iStock

The transition between autumn and winter is a joyful season for cooks – there’s hardly a more suitable time of year for filling a cast-iron pot with a comforting stew of meat or vegetables destined for a spell of simmering, braising or slow-cooking. Adding to the delight of this wholesome process is the fact that these one-pot wonders are the gift that keep on giving – have you ever noticed that a stew tastes even better the next day?

Whether it’s a pot of potato and leek soup, a paprika-spiced goulash or a turmeric and mustard seed curry, there is a certain stable of leftovers that really do improve with age. What is it about a soup, stew or curry that allows flavours to develop whereas other food, like chips or salad, have a short shelf life?

The food writer Guy Crosby, who was science editor at Cooks Illustrated (cooksillustrated.com) for more than a decade, puts this pleasant phenomenon down to chemical reaction. According to Crosby, “even after cooking ceases, many chemical reactions continue to take place in foods. In the case of a soup or stew containing milk or cream, the lactose breaks down into sweeter-tasting glucose. Similarly, the carbohydrates in onions develop into sugars such as fructose and glucose. Proteins in meat turn into individual amino acids that act as flavour enhancers. Finally, starches in potatoes and flour break down into flavourful compounds.”

The Institute of Food Technologists (ift.org) agree that it’s down to continuous chemical activity that produce more or even new flavour molecules. “Some flavour enhancement may involve the breakdown of proteins to release amino acids such as glutamate and small nucleotides that interact to enhance savoury, meaty umami taste or reaction of amino acids with sugars to produce new flavour molecules by the Maillard reaction (browning), which can occur when the leftovers are reheated.”

Back in 2000, Dr Maureen Cooper of Stirling University conducted research on why pizza tasted so good cold. In a BBC News interview, she name-checked the tomato purée as a crucial factor of pizza’s long-term appeal, as well as the fibres of a traditional pizza base being able to trap water. According to Dr Cooper’s research, both components appeared to prevent the fat from the cheesy toppings seeping through and making the base soggy. “Oil and water do not mix,” explains Dr Cooper. “Because the fat does not go through to the base, the pizza itself tastes so much better. That is not the same for chips, which are not recommended for eating cold.”

One would hope it goes without saying that not all food is better on day two. Sushi, made with raw fish, is obviously better – and, crucially, safer – on day one.