French revolution in the dining room 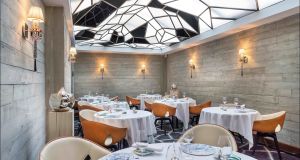 The food is prepared with machine precision, all towers and stacks, timed-to-the-second cooking. The server’s voice is distant and could be from another world. There is inane provenance-referencing – Irish beef, Monaghan eggs – and far too many gimmicks. The influences can jump from French to Swiss, even Brazilian, and everything is over-seasoned. The drinks pairings are fixed, with little choice. I know I’m just another number to these people.

McDonald’s isn’t for everyone.

But for a few hungover days a year, it is for me – for breakfast. I couldn’t actually eat in the place – I don’t like the smell or the noise and I’m not comfortable in spaces that you can clean with a power hose. But a cheeseburger with extra pickle, the brain-freezing, icy, eye-popping bubbles, crisp, salty fries? In that moment, it’s damn fine dining.

Fine dining is subjective but the ‘fayne dayning’ moniker started to really rear its too-fancy head shortly after the world economy went south. The backlash from emptier pockets was partly to blame but the real villains were fussy menus and dishes with too many ingredients and fussy service. Fussy was never cool.

What is cool now is that more high-end restaurateurs are dropping look-at-me food and service to look at you.

It isn’t something I want every week, but I’m ready for it again. I love restaurants and have spent 30 years obsessing about them, the last 15 making a living from that obsession, and all of that time with only one certainty – that the more I know about food, the less I know.

What I do know about, what is part of my job, travelling and learning, is food trends. Not one-way trends that keep inching forward, such as better sourcing, less waste and less bullying in the kitchen. Nor the edible fidget spinners like pulled pork, poke, burritos or baos. But deeper questions, like do diners want more courses or fewer? The answer is fewer. More vegetables or less? More. Fewer carbs? No, more actually. Is local sourcing always best? Not at all.

The new-fangled food trends the English-speaking world can’t get enough of right now are real pasta, real bread and everything French.

Old school is the new school – and an all-French school at that – of brasseries and bistros with accomplished chefs who want to abandon the rat race to cook pot-au-feu, tête de veau or simply steak frites and onion soup. And this is coming to a city near you.

Some of London and New York’s hottest restaurants today are French. The French Renaissance has also come to the dressy-up dining rooms and deep-pile carpeted palaces like London’s Bibendum, and to Paris. Even in the French capital, you have an American, Daniel Rose, selling snow to the Eskimos with a brace of busy bistros.

I knew Jean-François Piège’s name but it’s unlikely I would have ended up at his two-star Le Grand Restaurant any time soon – unless a chef like Mickael Viljanen from Dublin’s Greenhouse described it as the best food he has had in 10 years. The Greenhouse has been looking backwards to go forwards for quite a while, digging out old recipes and techniques and polishing them for today.

Preparation is everything, so my lunch companions at Le Grand were the same cast as the previous evening – when long food chats over Burgundy followed by nightcaps overlooking the Hôtel de Ville had me leaning more towards the Golden Arches than the Parisian Golden Triangle – my colleague-slash-dining partner-in-crime, Órla Dukes, Mickael Viljanen and Dax restaurant chef Graham Neville, an outwardly quiet gentleman whose stoic demeanour belies a deadly seriousness about food and kitchen skills.

Piège greeted us, dressed for the live-action version of Ratatouille in his old-school whites, in a restaurant that sounds terrible – a windowless space with polished concrete impersonating wood, a geo carpet and a monochrome stained-glass roof. With Agent Provocateur-style tassels dangling from the wall sconces, it should be a car crash but it’s Paris, so instead it’s gorgeous – elegant, subtle and quietly bold.

After what was a silly-looking, fiddly Flintstones bone used to serve a couple of okay snacks came four of the most giddy courses in succession. Courses rarely progress better and better in this setting, but this quartet had my kind of sustained drum roll.

A warm potato puff with a crisp, silk-thin crust with a seafood emulsion centre that burst in the mouth was topped with a walloping dollop of caviar, all sitting on the middle shelf of a hollow silver babushka egg, the base filled with a shellfish custard.

A diamond-cut celeriac rose basted in chicken butter was set with supercharged shards of hazelnut and bergamot. A Roscoff blue lobster was previewed with a silent ta-daah in its heady pot of blackcurrant stems and leaves for the 4D experience, making the connection between the zingy berries and their citrus cousins as plain as day.

A pillow of sweetbread was grilled over walnut shells and served with jugs of a walnut truffle gravy where the truffle had been macerated in walnut wine, like the best Sunday lunch ever, made by talented cooking squirrels.

Dish of the year

Any one of these dishes could be dish of the year and all left a table of jaded palates looking at each other with wide-eyed nods to reaffirm that this was, indeed, real life.

The desserts trolleyed us – a synchronised service set-piece and picturesque pastel ballet of blancmange, wild strawberries, tarte tatin and chocolate ravioli, followed by choosing from a magic marquetry egg-carton cupboard, and a smashing (literally) chocolate praline, dropped from a height onto the table by one of the dancing waiters, who had been ghosting in and out as needed.

This lunch may sound like a lot of food but it was the opposite of most gouty, overwrought tasting menus. The dishes were playful, light and restrained, with every bite grounded in complicated techniques that are in the hands of a master.

Fayne dayning is still around, clinging to company credit cards by its chintzy fingernails, but there’s a difference between that and this new, leaner, sharper thing and – whether you are into them or not – white table-cloths are winging their way to you again, like magic carpets of formality.

You don’t need to travel the world to find the best at this new fine dining – just fly 90 minutes to Paris where Jean-François Piège is pioneering a new kind of old dining – at its very finest.