From Michelin-starred restaurants to its many ‘bouchons’ serving traditional, hearty Lyonnaise cuisine – the culinary capital of France is a food lover’s paradise 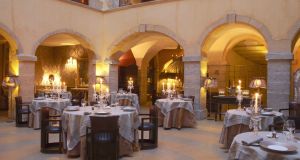 Les Loges, the Michelin-starred restaurant in the central courtyard at Cour des Loges in Lyon.

Lyon, the self-styled culinary capital of France, is a city steeped in gastronomy, from its 4,000 restaurants – and their 25 Michelin stars – to its biennial world championships for chefs, the Bocuse d’Or, and its phalanx of culinary schools.

The city was home to one of France’s best-known chefs, and originator of the cooking contest, the late Paul Bocuse, who died earlier this year at the age of 91. It was also where Eugénie Brazier became, in 1933, the first woman to earn three Michelin stars.

Mention an upcoming trip to the city, and recommendations will pour in from chefs and food lovers. Mentions of Madame Brazier’s restaurant, now a two-star in the hands of chef Mathieu Viannay since 2008, hit my inbox more than once prior to a recent visit.

“Go to La Mère Brazier, I ate there at Christmas and it is probably the best meal and experience I’ve ever had,” wrote Phily Roe, head chef at Glovers Alley in Dublin, among a flurry of must-dos and recommendations from food lovers.

Another head chef, Wade Murphy from 1826 Adare, also gave the city a glowing recommendation, and it turned out he had stayed in the same hotel that I was headed to, Cour des Loges in the heart of the old town, or Vieux Lyon.

The five-star heritage property with its 60 highly individual rooms arranged around a central interior courtyard – home to its Les Loges restaurant – is one of 16 owned by the Sibuet family. Others include Les Fermes de Marie in Megève and La Bastide de Marie and Villa Marie in the south of France.

The cobbled street on which Cour des Loges is located, rue du Boeuf, is home to no fewer than three Michelin-starred restaurants. The hotel’s Les Loges is at No 6, Jérémy Galvan at No 26, and recent arrival chef Tsuyoshi Arai and his restaurant Au 14 Février at No 36. Gourmets with deep pockets can book the hotel’s Street of Stars package, with dinner in each of the three restaurants, and three nights’ accommodation in a superior room, for €1,732 for two guests.

If that deal, accurately described by the hotel as being “for ardent epicureans”, sounds like just too much indulgence, you can book a class at the hotel’s La Petite Loge, a cooking atelier in a vaulted wine cellar, and pick up a sprinkling of star dust from chef Anthony Bonnet. You’ll be working with the best French produce, for which Lyon is famous, as well as, in our case at least, honey from the hotel’s own hives.

Chef Bonnet took our group through the steps required to produce two dishes – cod with confit vegetables and watercress sauce, and meringue with fruit and agave syrup. At his side, assisting and translating, was Joey Doverman from Cork, a Cork Institute of Technology graduate who has been working in Lyon for two years and in the kitchen at Cour des Loges for the past six months.

With a slice of the house pâté en croûte to start, the fish and dessert made for an excellent lunch, taken at a communal table in the atelier. The two-hour class, with lunch afterwards, costs €140, and can be booked for Saturday mornings (10.30am-12.30pm).

But Lyon’s gastronomic reputation is not built on fine dining. It is bouchons, or bistros serving traditional Lyonnaise cuisine, that are the building blocks of its food heritage. Once the preserve of the city’s canuts, or silk workers, in the 19th century, this is now where you’ll find hearty menus of local specialities such as such as cervelle de canut (a dip of fromage frais with shallots, dill and olive oil), quenelles de brochet, sauce Nantua (pike dumplings in crayfish sauce), tête de veau (calf’s head), and andouillette (sausage).

Daniel & Denise, Café des Fédérations, and Chex Georges are the names that crop up again and again in relation to Lyon’s bouchons. I can vouch for Daniel & Denise, of which there are three branches in town. Menus here go from a lunchtime-only formule of main course and dessert (€21), to a five-course tasting menu with wine (€51).

No visit to Lyon, especially this year, should pass without paying homage to the late Paul Bocuse. You can do so by dropping into Les Halles de Paul Bocuse, the municipal covered market named in his honour, or by booking a table for lunch or dinner at the city-centre campus of the Institut Paul Bocuse on Place Bellecour. The hospitality and culinary college also has two further campuses, each with a restaurant open to the public, at Écully, a 20-minute drive from the city centre.

At the market, pick up Lyonnaise specialities such as slabs of pâté en croûte and saucisson baked in brioche, Jésus de Lyon sausage, and the city’s vibrant pink praline and coussin de Lyon, a green marzipan sweet filled with chocolate. And tip your cap to the man voted chef of the century, not once, but twice – by the Gault & Millau guide in 1989 and again by the Culinary Institute of America in 2011.

Aer Lingus flies to Lyon St-Saint-Exupéry Airport, from where there is a tram link to the city centre.