What were we cooking? Our top recipes of 2018

Cake, curry and vegetarian dishes prove most popular with readers 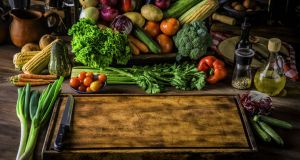 Vegetarian dishes proved very popular with readers at irishtimes.com during 2018

Let them eat cake . . . and scones, and pies, and cookies and crumble. The online community of cooks at The Irish Times has been baking up a storm during 2018. Perhaps we have been embracing baking as a house-bound hobby during one of this year’s many weather-related storms?

No fewer than eight of the top 20 most read (and most cooked, we hope) recipes at irishtimes.com over the past 12 months are for sweet treats of some sort. But we are proving to be a healthy bunch too, with beetroot, kimchi and quinoa recipes making it into the top 20, and almost half of the recipes in that bracket being for savoury dishes that happen to be vegetarian.

But our standout, runaway most popular recipe of 2018 is for ... chicken rendang. Not just any old chicken rendang, though. Remember “Rendanggate”, the furore that followed the episode of MasterChef UK where judges John Torode and Gregg Wallace sent home quarter-finalist Zaleha Kadir Olpin because the chicken in her rendang had skin that wasn’t “crispy”?

The rumpus escalated to a full-blown diplomatic incident, with the Malaysian prime minister Najib Razak wading in on the origins and characteristics of the dish, which originated in Indonesia but is popular in Malaysia and Singapore also.

An authentic recipe for the slow cooked chicken and coconut curry was required, and US-based Malaysian food writer Bee Yinn Low shared hers with us (recipe in link and below). If you haven’t already cooked it, give this aromatic curry a go. You will note that Low’s recipe specifies skinless chicken thighs or breasts. Whew.

Potatoes also came out top of the crop of 2018 recipes, with new food columnist Jess Murphy, chef/proprietor at Kai Café and Restaurant in Galway, reeling us in in our droves with her recipe for fancy pants Hasselback potatoes, the second most-read recipe of the year.

Perhaps it was Murphy’s handy tip, using two chopsticks to ensure that the incisions that give these Swedish potatoes their hedgehog appearance stop short of an all-the-way-through cut.

Interestingly, Lilly Higgins also contributed a recipe for Hasselback potatoes this year, giving hers a dusting of smoky paprika and teaming them with kale and coriander pesto.

Spuds were back in at number eight, courtesy of Carmel Somers’s recipe for Dauphinoise. My oven would take considerably longer than the 20-25 minutes cooking time suggested here, and a good tip, gleaned from Domini Kemp, is to let the potato slices cook for a bit in the milk, cream and garlic, before transferring to the oven.

Confirming that our cooks love a healthy recipe, as well as a reason to turn the oven on and get baking, the third most read recipe of the year is for wholemeal brown scones. Vanessa Greenwood serves them here with cream and jam, but they would work equally well with a savoury topping, and she points out in the ingredients that the sugar is optional.

The healthy vibes continue with beetroot purée at number four and kimchi at number five, both Carmel Somers’s recipes, and both vegan-friendly, as is her chickpea curry at number eight.

But what about all those yummy cakes and puddings? After the scones, Greenwood’s mini lemon meringue pies slot in at number six. The same writer’s blackberry and apple crumble is at 10. This luxurious and versatile crumble topping, made with oats, sugar, butter, hazelnuts, and almonds – both ground and flaked – could be used with any fruit.

Portuguese pork chops, another Carmel Somers special, is at number nine, accompanied by an alluring introduction explaining the inspiration behind this simple dish which relies on a few top-quality ingredients – and a long marinade.

Most-read recipes on irishtimes.com in 2018

1 lemongrass, white part only, pounded and cut into strips

1 tablespoon sugar, or to taste

Chicken Rendang is a slow-cooked and stewed chicken dish, with a spice paste, coconut milk and toasted coconut flakes. The chicken should be soft and tender to the bite – not crispy despite what a MasterChef judge might say – and the spices lend intense aromas and flavours to the dish.

1. Put all the ingredients for the spice paste in a food processor. Blend well.

2. Heat the oil in a skillet, add the spice paste, cinnamon, cloves, star anise, and cardamom pods and stir-fry them until aromatic.

3. Add the chicken and lemongrass, stir to combine well with the spices.

4. Add the coconut milk, water, and simmer on medium heat, stirring frequently until the chicken is almost cooked.

5. Add the kaffir lime leaves, toasted coconut, stir to blend well with the chicken. Lower the heat to low, cover the lid, and slowly simmer for 30 minutes or until the chicken is tender and the liquid has dried up. Add more sugar and salt to taste to taste. Serve immediately with some rice.

Preheat your oven to 200 degrees Celsius.

To prepare the potatoes, scrub and cut: the easiest way I have found is to lay the potato lengthways on a board and place two chopsticks on either side. Using a sharp knife and holding the potato in place with the sticks, make crossways cuts 3mm apart, cutting just down as far as the sticks. You could alternatively place them on a wooden spoon, or I have also seen them speared with a skewer about 5mm from the base, sliced across and the skewer removed. Anything that stops the knife slicing clean through the potato will do.

Place the potatoes on a parchment-lined baking tray. Brush the spuds generously with melted butter and olive oil. Season well with the salt and pepper.

Bake for 50 - 70 minutes, basting every 20 minutes until the slices spread apart and are golden in colour.

To glaze: 1 egg mixed with a little extra milk

To serve, whipped cream and jam

Preheat oven to 220 degrees fan and line a baking sheet with baking parchment.

In a large bowl, sieve together the wholemeal flour, self-raising flour, baking powder, salt (and sugar, if using it). Tip any wholemeal flour left in the sieve into the mixture.

Using your fingers, rub the butter through the dry ingredients until the fat is evenly mixed in and the mixture resembles coarse breadcrumbs.

With a light touch, stir the buttermilk with only 3-4 turns of a spatula into the dry mix to form a loose, moist dough – don’t over-mix it.

Place the scones on the lined baking sheet. Before baking, whisk the egg with a little milk and use a pastry brush to baste the top of each scone.

Bake at 220 degrees for 12-15 minutes depending on size, until risen and nicely golden on top (reduce oven temperature to 180 degrees after 10 minutes if the scones are getting too dark on top).

Once baked, transfer to a wire rack to cool. To serve, cut in half and serve with a dollop of cream and your favourite jam.