Bia Rebel: Dazzlingly perfect ramen where you might least expect it 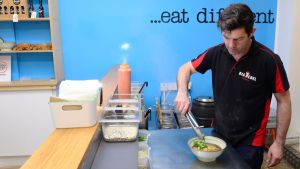 It’s the spoonfuls of sameness that put me off soup. They’re too much like food cooked at home, the stews and curries that make the handiest daily dinners. In restaurants I want to be dazzled.

And that’s about to happen in the most unlikely of settings on the Ormeau Road in Belfast. We’re here thanks to a text from a friend. The next day we’ll follow winding roads to a restaurant breathlessly announced in a press release full of the promise of new exciting things. But we’ll eat a deeply ordinary Sunday lunch. It’s a life lesson: Text from a friend? One. Breathless press release? Zero.

Bia Rebel is in a strip of shops on the Ormeau Road with a bus stop outside. Ikea stools line up along a long narrow table in a look that says shoestring budget. There are handbags that cost more than this fit-out. But there’s that wonderful smell of cooking that greets us like a warm hug as soon as we step in off the street.

The Belfast ramen is a perfect bowl of food. It doesn’t feel bottomless like some ramen dishes, where the slurping becomes dutiful

Bia Rebel is a ramen bar. Referring to ramen as soup is probably a food crime among the devotees of the art. It’s the brainchild of chef Brian Donnelly and former reporter Jenny Holland. Having a chef with Michelin kitchens in his CV devote himself to doing one thing is a rarity.

But that’s where the dazzle begins. Because ramen isn’t about combining everything into a one note savoury bowl. It’s as intricate a kitchen skill as a plate of squeezy bottle dots, a skid mark of sauce topped off with a foam.

But first the gyozas. These are pot stickers in the best sense, parcels of shredded sweetly flavoured duck and finely diced carrot in pastry envelopes which have been steamed and finished on a pan so they are the best kind of Belfast griddle bread crisp on the bottom. There’s an alchemy to this (I suspect a super hot pan is involved), getting a crisp bottom without drying out these juicy parcels of meat. Bia Rebel nails it.

We’re sharing a Belfast ramen bowl. This takes, according to a sign on the wall 40 hours of making. This could sound like everything stewed like the contents of a forgotten tea urn at the back of a church hall. But some of the making happens hours and some minutes before serving. And more craft has gone into it than any other bowl of food in this price bracket.

But first they have two house-made drinks in the fridge, a lemon and lime which has disappeared down the throats of hungover customers before we arrive. Belfast is a city where sometimes everyone seems to decide to get trollied en masse. The night before was such a night, Brian tells us as he comes out from behind the counter for a chat. Anything can spark it: the first sunny day, a match or just a random decision by the hive mind to party. So we have a glass of the Jamu instead, a vehemently yellow drink like orange juice with added neon filter. The extra oomph comes from grated turmeric, which will stain your skin orange like a 40-a-day smoking habit and there’s ginger and lemon here too. It’s delicious.

The Belfast ramen is a perfect bowl of food. It doesn’t feel bottomless like some ramen dishes, where the slurping becomes dutiful. There are chopsticks to fish out the slices of pork which, like those pot stickers, have been finished crisply at the edges like the shards snaffled from a roast when you’re carving which always taste better than a carefully cut slice. Spring onions have been sliced into rings and put in just before serving so they’re just getting to know the shimmering beaded broth and still have their bite and onion taste. There’s a cured tea egg the colour of a 1970s shop mannequin, a fudgy savoury base note to everything.

The noodles, which are made in house, have gorgeous nutty bite and warmth. The broth is the best I’ve ever tasted, flecked with golden drops of meat fat and the colour of light tea. Each time you fill the wooden slurping spoons another set of distinct and lovely flavours springs together. It is such good food in every sense, food that feels good for you, sets you up for the day, whether it’s the morning after the night before or the start of something new.

We leave blown away by ramen on the Ormeau Road and already planning a return visit. Bia Rebel feels original, brilliant and entirely right. Kitchen dazzle in a simple bowl of deliciousness.

‘How do I know if someone is flirting with me?’

How to make the most of your natural brows and lashes