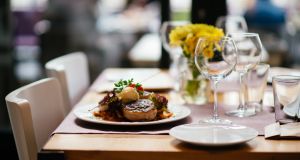 Restaurants will be required to display calorie counts on menus under new legisation to be published by the Minister for Health. Photograph: iStock

Restaurants in Ireland will be required by law to display calorie counts on menus by the end of the year, according to new proposals.

Minister for Health Simon Harris intends to publish the legislation by the end of 2019 and the move comes under the Government’s obesity action plan.

“This has been debated and discussed for quite some time. But I will be publishing legislation later this year to introduce calorie posting,” Mr Harris told the Irish Times.

“There has been plenty of discussion, but we will take action. I would hope that businesses across the country will, by their own initiative, lead on this issue. This is about giving consumers information and that is surely a good thing and should be embraced. We recognise that this requires a legal footing and we will be taking that action.”

A traffic light system, with red signifying dishes with high calorie content and green for low calorie options, may be the first step in implementing the move, which has been under discussion in Ireland for many years.

In 2012, the Food Safety Authority of Ireland launched a national consultation on the matter, the results of which revealed that a “vast majority” of consumers were in favour of calories on menus, in order to make informed choices, while the food sector was “less enthusiastic”.

In 2015, proposals to require restaurants to disclose the calorie count of meals were approved at Government level, and Mr Harris now seems intent on moving the issue forward.

Adrian Cummins, chief executive of the Restaurants Association of Ireland, said his members are “totally opposed” to the move.

“From a practical point of view, individual restaurants having to put calories on menus isn’t the answer to dealing with the obesity problem, it’s about education,” he said.

Mr Cummins also voiced concerns about the costs involved in implementing the move, on top of the recent VAT increase. “I think he is going to get a backlash from our industry on this. They seem to have a vendetta against the restaurant industry at the moment,” he said.

Gareth Smith, chef proprietor at Michael’s restaurant in Mount Merrion, south Co Dublin, believes that the legislation will be difficult to implement.

He said: “While I agree that people should know more about what they are eating, I think it will be impossible to regulate, implement and enforce.”

He also has concerns that it may lead to increased use of portion packs and pre-prepared ingredients.

“I fear it will stifle creativity and give restaurants another reason to use even more processed foods,” said Mr Smith. “It’ll end up being more snip and pour out of bags on to plates, as they will be conveniently ready-labelled, for chefs to copy.”