Who makes the best cup of coffee in Ireland? The results are in... 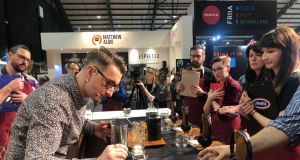 Wojciech Tysler, Irish Barista Champion 2019, performing for the judges at the final which took place at Catex, at the RDS.

Wojciech Tysler is the Avonmore Irish Barista Champion for 2019 and will go on to represent Ireland at the World Barista Championships in Boston in April. Tysler works at Bewley’s headquarters, where he is a barista trainer.

The finalists in the competition each had 15 minutes to make four espresso coffees, four cappuccinos and four speciality drinks made with coffee and other ingredients, excluding alcohol.

The competition was organised by the Speciality Coffee Association (Ireland) and took place at Catex, a food and hospitality industry event at the RDS in Ballsbridge, Dublin 4.

Tysler was the third of six competitors to take the stage in the final, and his performance was marked by four sensory judges, assessing the taste and sensory aspects of the beverages, and two technical judges, giving marks for consistency and accuracy of barista skills.

Damian Marshall, national co-ordinator for the SCA (Ireland), said: “Every year the performance and level of competition increases and this year has been no different, with the introduction of some amazing single origin espressos.”

He also commented on the creativity seen in the speciality drinks. The winner’s speciality featured mango purée, Earl Grey cold brew tea with a dash of cold frothed milk, mixed with cold espresso.

“As well as wowing the judging panel with his beverages, Tysler brought a level of customer focus to his performance, showing the judges that the coffee industry is shifting towards the importance of interacting with the customer,” Marshall added.

Tysler, who is originally from Poland and has been in Ireland for 14 years, has been training baristas for nine years. “After five years of competing, finally my dream has come true,” he said. He has been practising for the competition several times a week for the past three months. His chosen coffee, Cerro Axul, came from a farm in Colombia.

Renata Khedun is the 2019 Avonmore National Latte Art champion, and will represent Ireland at the world championships in Berlin in June.

Competitors in this category had 10 minutes to produce three pairs of visually identical latte art beverages. These were assessed by two visual judges, who marked on the creativity, complexity and similarity of each pair, and one technical skills judge.

“A steady hand and calm nerves are always required from latte art competitors,” Marshall said. “This year’s winner amazed the judges with her three creations of a flying witch on a broom, a crow in a forest, and a cat sitting at a cauldron.”