Reese Witherspoon on dining out with her Big Little Lies costars: "Who pays? I pay" 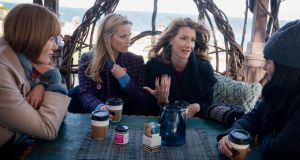 Reese Witherspoon used a recent public appearance promoting season two of the HBO drama Big Little Lies to vent her frustration with her costars: when they go out to eat she’s the only one who ever picks up the tab.

“Who pays? I pay. None of these girls ever pull out their credit card,” Witherspoon said before admitting – prompted by Nicole Kidman – that it was true, Meryl Streep did, once. Yes, Witherspoon was seated alongside her four costars as she accused them of freeloading, but “Who pays?” is an awkward question at the best of times.

A number of factors crystallise silently in the split second following the waiter’s innocent inquiry “Together or separate?” – many to do with the dynamic between you and your dining companion. Is your relationship personal or purely professional? If the latter, is there a clear power discrepancy?

If so, it’s up to the senior person to pick up the tab. After the actor Zoë Kravitz objected that when she and Shailene Woodley offered to pay, they were always rebuffed, Kidman said that this was because she and Witherspoon were executive producers. (Woodley, for her part, said, “Don’t even get me started. This is very upsetting to me.”)

With friends, taking it in turns to pay is sensible, but only if you see each other with some regularity. If it’s once or twice a year, your offer to “get the next one” might come across as a cop-out. Whoever extended the invitation and chose the venue should also be factored into the situation.

Of course, the overarching question – who earns what? – cannot be asked. And certainly not in front of the waiter, standing with fingers poised over the card machine.

Even if you do end up footing the bill for one more brunch than you’re treated to, these things tend to even themselves out. “The Amex bills really tell the truth,” Witherspoon concluded – but she missed the point that it’s unseemly to look. Especially when you’re said to be taking home $1 million an episode. – Guardian

Hilary Fannin: A trip to Belfast feels like a much longer journey
10