‘I like what I am’: Dundrum off-licence going strong since 1909 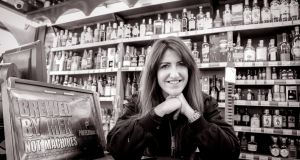 Ruth Deveney in Deveney’s off-licence, Dundrum, Co Dublin, which won the best spirit specialist of the year at the National Off-Licence Association 2020 awards

The annual National Off-licence Association awards (Noffla) took place in late January in Dublin. These are the Oscars of the drinks world, held by the country’s independent off-licences. Deveney’s of Dundrum walked off with the award for best spirits shop – for the fifth time.

Deveney’s started as a family grocer in 1909, gradually developing into a chain of off-licences. At one stage there were 16 branches, all located around the southside of Dublin. The Dundrum shop, the sole survivor, has been open almost 50 years. Tom Deveney retired a few years ago, and the third generation, his daughter Ruth, took over.

“I suppose in this difficult climate, with alcohol being sold everywhere, even garages, the important thing is to be a specialist,” says Ruth. “You have to stock things that are unique, and interesting and different – wine, craft beer and spirits. And you still have to deliver value. Interest changes year by year; the last two years were gin-led, and liqueurs before that, but this Christmas we saw a huge increase in interest in whiskey.

“I am delighted with the award. I really didn’t expect it. So many off-licences have disappeared in recent years, but those that still exist are fantastic. The competition is fierce. Naturally any award winner will have an excellent range of spirits [past winners include Redmonds of Ranelagh, and Mitchell & Son, CHQ] but Deveney’s are also well-known among the craft beer fraternity for being an early adopter [the Noffla beer award was won by McHugh’s, Malahide Road] as well as having a great selection of wine.

“We are from the village of Dundrum and we try to keep that community alive, alongside one or two other shops and pubs. We have a huge number of local customers; I know the customers, their children and even their grandchildren.”

Close to the mammoth Dundrum Shopping Centre, the shop retains a unique character and style. “Last year I did the external side. With the inside, I am trying to keep the old traditional vibe – shabby chic?”, Deveney laughs. “I like what I am.”

The customers appear to as well.