‘He hasn’t come to kill you, Ross. He’s come to dig up the time capsule we buried in the gorden’ 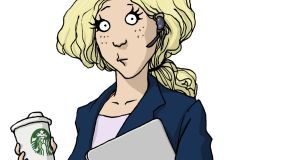 Sorcha steps out of the kitchen, all smiles. She’s like, ‘Hi, Dad – oh my God, you brought the shovel!’

I answer the front door to be greeted by the sight of Sorcha’s old man standing there with a shovel in his hands. It’s the same shovel he takes with him everywhere in the boot of his cor – as he said in his father of the bride speech, just in case he has to kill and bury me in a hurry.

I watch the thing glisten in the morning sun – according to Sorcha’s old dear, he polishes it at least once a week – and I slip into full verbal diarrhoea mode.

I’m there, “If it’s about that girl I was having coffee with in Cinnamon the other day. She creates scent signatures for hotels and offices and we were discussing how she might grow her client base?”

“Get out of my way,” he goes, stepping past me into the hallway. “Where’s my daughter?”

Sorcha steps out of the kitchen, all smiles. She’s like, “Hi, Dad – oh my God, you brought the shovel!”

I’m there, “Her name is Salomé and there’s nothing in it.”

But Sorcha goes, “He hasn’t come to kill you, Ross. He’s come to dig up the time capsule we buried in the gorden just before the millennium.”

Literally 60 seconds later, we’re in the back gorden and I’m watching her old man turn over the ground so quickly that I realise, when the day inevitably comes, my remains will never be found.

“Has Dad had another affair?” Honor goes.

Yeah, no, she’s stepped out into the gorden as well. It has to be said, she’s taking the possible murder of her father very much in her stride.

“The girl was just a business associate,” I go. “They’re actually digging up a time capsule.”

She’s like, “A time capsule?” and it’s obvious from her voice that she thinks it’s lame.

“Yeah,” Sorcha goes, “it was buried under the statue of the Venus de Milo that we got from Johnstown Gorden Centre. We did it on New Year’s Eve in 1999.”

“Because, Honor, we thought it might be nice to dig it up after 20 years and remember how we lived back then!”

Honor looks at me like it’s the most ridiculous thing she’s ever heard. “I only came out here because I thought he was digging a hole for you,” she goes.

I’m there, “I’m sorry you had a wasted journey.”

Sorcha’s old man fixes Honor with a look and goes, “Your mother grew up in a time when young people placed a value on memories. Not like your generation, who just move from experience to experience, photographing everything while appreciating nothing.”

I hate my father-in-law the same way that dogs hate lampposts.

He reaches into the ground and he pulls out this, like, red cooler box? Then he carries it over to the patio and wipes all the mud off the top of it with his hand.

Sorcha pauses before popping the lid. “Oh my God,” she goes, “I feel like an orchaeologist about to discover some – I don’t know – ancient civilisation!”

“It’s a spray that – oh my God – everyone used to put in their hair to make it go lighter in the sun! I think it was, like, lemon juice and hydrogen peroxide.”

I laugh. She can be very funny when the joke is on someone else.

One by one, Sorcha storts pulling things out, the excitement growing in her voice each time. “Oh my God,” she goes, “my combats! That’s all anyone ever wore in those days, Honor! Oh! My God! Dad, this is my fake ID from the summer I spent waitressing in Montauk! Oh! My! God! The label from a bottle of Pink Grapefruit Woody’s – the first drink I ever had, aport from obviously red wine with dinner when we went on holidays to France! Ross, look, my Nokia 3210! I remember sending my first ever text message on that and feeling like the world had suddenly changed! Er, Ally McBeal on VHS anyone?”

This continues for several minutes. And, looking at Sorcha’s old man, one thing becomes suddenly clear. He’s disappointed. I don’t know what he thought they put in the box, but it definitely wasn’t this old junk.

“Dig deeper,” he goes. “There must be other things,” meaning things that aren’t s**t?

She whips out a black dickie-bow.

“Honor,” she goes, “this is the tie that your dad wore to my actual debs! Although the least said about that night, the better! Oh my God, look, Ross! Foster’s Dollars! They were, like, a currency you could use in the UCD bor – although obviously just to buy Foster’s! Oh my God, there’s one of my mix tapes! Look at the songs on here! Livin’ la Vida Loca by Ricky Mortin! I Want it That Way by the Backstreet Boys! The Story of Love by OTT! Oh my God, a concession for Club Sarah, which was this amazing, amazing nightclub, Honor – in, believe it or not, Rathfornham?”

Honor goes, “Like that d**khead said,” referring to – hilariously – her grandfather, “it must be a generational thing? You put that s**t in a time capsule –I’d put it in the black bin.”

“Oh my God,” Sorcha goes, “look, Dad, an envelope in which I wrote down my Goals for the New Millennium”, and she rips the thing open like it’s her Leaving Cert results and whips out this little stack of cords.

“Okay,” she goes, “are you ready? Number one: become Ireland’s first woman taoiseach! Okay, that hasn’t quite happened yet? Number two: marry the love of my life! And then underneath I’ve written…”

Sorcha suddenly stops. And I watch all of the colour drain from her face. I’m there going, “Who? Whose name did you write?”

But she doesn’t answer me. She just scrunches the cord up, sticks it in her pocket and goes, “This was a stupid idea”, then she stands up and walks back to the house.

And all I can think is that maybe Honor and her generation have the right idea. Take a selfie and move on. And let the past stay buried.

Coronavirus: How to practise social distancing while queueing and walking
10