Life is busy. This can be difficult for a new vegetarian such as me

Changing Courses: Resignation has set in for week three of my meat-free experiment 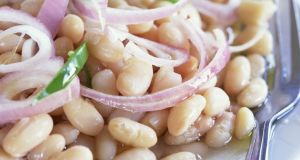 Beans means airmiles – an unhappy discovery for the reluctant vegetarian

They say it takes three weeks to form a habit, and as I enter my fourth week without meat I am beginning to see the truth in that.

Everything has been much easier these last few days. After giving up fish, I feel much less confused about how to make a meal and more resigned to the reality of plant-based dinners.

Instead of clinging on to the comfort of building a meal around fish, now I have no choice but to use beans, lentils or vegetables as my base ingredient.

Throughout this column I have made an effort to follow vegetarian recipes, such as a sweet potato and butterbean stew, lentil and coconut soup and black bean chilli.

This weekend I made vegetarian moussaka from The Happy Pear cookbook, and it was a delight. The waft of rich, herby smells from the puy lentil filling made it hard to believe there was no beef involved.

It took me a couple of hours to make the moussaka, and I was happy to tip away at it on a Saturday evening.

I resorted to a few lunches of beans on toast – hey, I’m human – but the resulting online comments about me being lazy and not trying hard enough were disheartening to read

What has proven to be the biggest challenge are those moments where I haven’t been prepared. There is simply not always enough time – or ingredients – to create an inventive meal from one of the many cookbooks I’ve been given.

Life is busy. Sometimes you need to grab a sandwich, or get dinner on the table in 20 minutes. This can be difficult for a new vegetarian like me.

A general election was called last week, and I work in a newsroom. It can be a chaotic place at the best of times, but an election is like our Christmas, Thanksgiving and Ramadan rolled into one. I hadn’t braced myself for it, and found it very hard to juggle the demands on my time as I grappled with what to make for lunch, when to go to the gym and how to get my copy filed on time.

This meant I resorted to a few lunches of beans on toast – because hey, I’m human – but the resulting online comments about me being lazy and not trying hard enough were disheartening to read.

Alongside the scrutiny of cowardly, faceless online commentary I am also trying to square very legitimate arguments from farmers who feel I am only adding to their woes.

One farmer texted me to say they “were already being hammered right, left and centre” – with this column presumably only adding to that.

I spoke to Mayo-based Green Party candidate Saoirse McHugh who says that it is true cutting down on meat will negatively impact small rural communities but that there has to be a way of doing it which won’t leave them behind.

“True it negatively impacts small rural communities but I believe that is down to bad planning. Our farmers were sold a false future all so the meat processors and a few enormous farms could continue to make huge money.

“Farmers are worried that the inevitable change that is coming to Irish agriculture will replicate the inequality that already exists and it will be only the very largest farms that will do well out of it. Climate action can be great for our society but it will have to be designed that way,” says McHugh.

Last week, I promised to be more mindful of where my meat replacements were coming from, and the potential environmental impact of eating largely imported foods.

Ironically, if we were all to give up meat, and replace it as I have with beans and pulses, the air mileage of our diets would dramatically increase

A quick Google shows the various tins of beans and packets of lentils on my shelves likely come all the way from India, Canada, South America and France. Yet I have become reliant on these pulses, grains and beans. I do not know how else a vegetarian could get by while still getting enough protein and variety into their diet.

It is hard not to see the irony here. If we were all to give up meat, and replace it as I have with beans and pulses, the air mileage of our diets would dramatically increase.

I didn’t give up meat because I was ethically opposed to the killing of livestock. Nor did I give it up to save the planet. I did it because I was asked, and because I was curious as to whether I might feel better, or begin to believe in some of the aforementioned causes.

None of those things have happened so far – and the further into this I get, the less likely they seem.

That can only be a positive.

Niamh Towey is writing a weekly column about cutting meat from her diet – first by adhering to a pescatarian diet (i.e. a vegetarian diet, apart from fish).