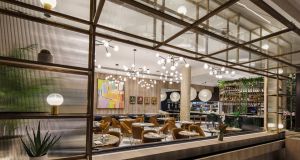 The Chancery Grill is that rarest of things: a hotel restaurant that’s genuinely interesting. A recent addition to the Radisson Blu Royal on Golden Lane in Dublin 8, the smart dining room and horseshoe cocktail bar are part of a major investment plan for the hotel, which will include a new gym and spa, an eight-storey extension and a convention centre.

The menu is heavily influenced by the installation in the kitchen of a wood-fired asador grill, and chef Tommy Butler and his team have designed a menu that makes the most of its smoking, charring and caramelising abilities.

Irish ingredients are highlighted, producers are name-checked, and using produce harvested, baked, brewed or distilled in the city of Dublin brings the local ethos into hyper-local territory.

It’s not all animal proteins sizzling and smoking on the asador. The menu has a version of Dan Barber’s carrot steak, a take on the US restaurateur and author’s “third plate” concept where the vegetable is the main component of the dish. Barber’s carrot steak comes with a meat sauce on the side, but here it is served with orange jam and green herbs. Francis Mallmann, the Argentinian master of cooking over fire, is also referenced, with a version of his crushed potatoes with tapenade on offer.

The Chancery Grill opens Monday to Saturday, 5pm-10pm, and Sunday from 5pm-9pm. thechancerygrill.ie.

Today is International Irish Coffee Day, and if you are in Dublin today at noon you can watch a Guinness World Record attempt to make the most Irish coffees in under three minutes.

Four bartenders will compete in the bid, using Paddy Irish Whiskey, and the venue is The Old Store House, Temple Bar, Dublin 1 (noon-2pm).

The Corkscrew wine shop and private tasting room on Chatham Street in Dublin 2 is donating all proceeds from its annual Wine Fair to Pieta House. The fair takes place on Sunday, February 2nd, in the Westbury Hotel, off Grafton Street (1pm-5pm). More than 100 wines will be available to taste, and there will be plenty of winemakers on hand to chat to. Tickets, €25, are available in the shop and online at thecorkscrew.ie.

Cloud Picker Coffee will host the 2020 Irish Brewers’ Championship at its new roastery in Crumlin, Dublin 12, on February 15th. The winner will represent Ireland at the World Brewers Cup at Melbourne International Coffee Expo in Australia on May 4th-7th.

Frank Kavanagh and Peter Sztal’s Cloud Picker cafe, which opened on Pearse Street in Dublin 2 last May, is the place to pick up one of the best designed reusable coffee cups I have come across. The MiiR 8oz tumbler (€21) is insulated, beautifully designed, and the perfect size for a flat white. They are also available online atcloudpickercoffee.ie.