Cornucopia cook book: a vegan feast from breakfast to soups to lunchtime bites 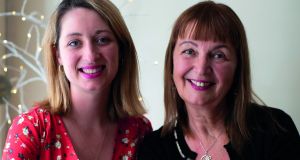 Dairíne and Deirdre McCafferty of Cornucopia are among the contributors to Cornucopia: The Green Cookbook, a meticulous, thoughtful and generous book, much like the business itself. Photograph: Leo Byrne

Just over a decade since the much-loved Dublin vegetarian restaurant Cornucopia shared its recipes with readers in Cornucopia at Home: The Cookbook, the family firm is back with a follow-up volume, and this time, in keeping with ever changing eating habits, it’s a vegan compilation.

Cornucopia: The Green Cookbook is another meticulous, thoughtful and generous book, much like the business itself, which has tripled in size at its Wicklow Street location in the era between the two publications.

The book is a team effort, with recipes adapted for home cooks by head chef Tony Keogh, along with food writer Aoife Carrigy, and contributions from many cooks who have passed through the kitchen. There is an input too from the mother and daughter who own and run the business, Deirdre McCafferty, who set it up with her late husband Neil, and their daughter Dairíne, who is now managing director.

The recipes are a good mix of easy, quick dishes, and more elaborate creations, identified as being simple, moderate or complex to reproduce. There are chapters on breakfast, soups, snacks and lunchtime bites, salads, main courses, sweet treats, and sauces, sides and other basics, as well as a comprehensive Cornucopia Kitchen section which covers equipment, techniques and ingredients in great detail.

Cornucopia: The Green Cookbook is published by Gill Books, €24.99.

A brunch recipe for all seasons

Seasoning is a wonderful collaboration between sisters Laura and Sally Caulwell, who are a chef and an illustrator, for Clare Grennan’s Irish Design Shop. It brings together 12 seasonal brunch recipes written by Laura, printed on the back of original illustrations by Sally. The cards, one for every month of the year, are designed to be displayed in the kitchen on a handcrafted wooden stand by Coolree Design.

The vegetarian recipes are really interesting and original, featuring seasonal Irish ingredients, and the illustrations are so beautiful it’s hard to know which side of the card to give pride of place to. The recipe cards are printed on matte laminate and can be wiped clean of sticky finger marks. The boxed set, together with the display stand, costs €45 and is available from the shop, or online.

Derry and Sallyanne Clarke of L’Ecrivain restaurant in Dublin are decamping to Dromoland Castle for the weekend of November 15th and 16th, and are bringing a taste of their Baggot Street Michelin-starred restaurant with them.

On Saturday the 16th, they will host L’Ecrivain at the Castle, alongside the hotel’s executive head chef David McCann and maitre d’ Se (correct spelling) Gardiner. The six-course menu is a collaboration between both chefs, highlighting local Co Clare produce, and the L’Ecrivain dishes will remain on the menu in the Earl of Thomond restaurant throughout November.

A weekend two-night B&B package for two people, including the six-course menu, canapes and aperitifs, and six wine pairings, chosen by Dromoland Castle head sommelier Ian Scott, costs €540 per person. The package can be reserved online at dromoland.ie, or by telephoning the hotel.

The Cork Baking and Chocolate Weekend returns to the Cork International Hotel on November 22-24th. Visiting chocolatiers, sugarcrafters and bakers, including William Curley from London, and Paul Kelly, executive head pastry chef at the Merrion hotel in Dublin, will take part in demonstrations and workshops. There will be a marketplace where you can buy the latest equipment and ingredients, and tickets will be on sale for a chocolate-themed dinner and afternoon tea. For the full programme of events, and tickets, see corkbakingandchocolate.com.

The south Co Dublin suburb of Blackrock is to get two new restaurants, with the opening of Volpe Nera, from former Etto head chef Barry Sun, and Mina Wine Bar and Bistro, from the team behind Ciamei Cafe and Volare restaurant in the village market.

Mina occupies a prominent main street position, next to Bear Market Coffee. The former pub premises that has been given a radical overhaul, though the original stained glass panel entrance door, with BAR picked out in royal blue, has been retained.

Volpe Nera, meaning black fox, and denoting the restaurant’s locating, midway between Blackrock and Foxrock, is at 22 Newtown Park, alongside the Wishing Well pub. It will be a neighbourhood restaurant with a Mediterranean slant, serving snacks, small plates, sharing platters and full menus. Opening is slated for mid-November. Front of house will be led by Darren Darcy, formerly of L’Ecrivain.

Health Hints for the Home: Worms in children
6

The more the British learn about Ireland’s loyalists, the less they like
9