Kombucha: What’s in it and does it have health benefits? 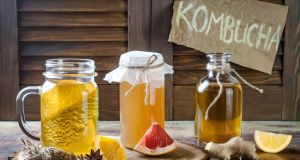 Kombucha became so popular in California that it was offered on tap at some of the offices of WeWork. Photograph: iStock

Kombucha has been around for centuries in the Far East, but it’s enjoying fresh interest in the West. The fermented tea drink has gained favour as it is believed by some that it can benefit the bacteria in the gut. It became so popular in California that it was offered on tap at some of the offices of WeWork, the troubled work space rental company.

But what is kombucha? Is there any clue on the labels on bottles sold here?

Kombucha is a fermented tea drink made with a “symbiotic culture of bacteria and yeasts”, which is known as a scoby. It comes in bottles, cans or tea-bags. Or you can make it yourself. The earliest mention of it seems to be in China in 221BC. Because it is fermented, it is naturally lightly fizzy and has a tiny amount of alcohol, usually no more than 0.5 per cent.

Kombucha might be newish to the West, but there are at least three Irish brands on sale here

The bottles also advise consumers to “open carefully” and “never shake”, with “never” in bold letters. That is because the drink is fizzy enough to pop. Captain Kombucha also mentions that it “may contain sediment”, which is the remains of the culture that has gobbled up lots of the sugar.

The marketing bumf on the brown “UV plastic” bottle refers to a “captain” who went to Japan in search of an elixir of life, found it and brought it back to Portugal, thus leading to this “legendary fermented drink”. Captain Kombucha, who bears a remarkable resemblance to Captain Birdseye, now operates out of an office park in Sintra. It’s hard to take seriously a product selling a fairy tale, especially when there is an error on the nutrition panel. It says the drink has “fat 0g, of which sugars 0g”. It should say “fat 0g, of which saturated fat 0g”.

Kombucha might be newish to the West, but there are at least three Irish brands on sale here.

DBKB, which says it was “Ireland’s first kombucha brewery”, has been making the drink in Donegal since 2012. Its SynerChi live kombucha is unusual in that it comes in clear bottles. Most other brands use dark glass to protect the drink from sunlight. Its “original sencha tea” flavour is made with Japanese green tea. The ingredients are filtered water, golden cane sugar, 9 per cent sencha green tea and kombucha culture, all organic.

The second ingredient is sugar, but that doesn’t translate into a lot of calories. One 330ml bottle has fewer than 60 calories; that’s less than half the number of calories in a can of Coca-Cola, but without the added sweeteners and flavourings of standard low-calorie drinks.

It also is described as “lightly sparkling”. This is as a result of the fermenting process rather than by adding carbon dioxide. It’s also free from dairy, which is helpful for the lactose-intolerant looking to get some good bacteria that does not involve dairy.

Munster Brewery, which is based in Youghal, makes a very similar product. Holo kombucha contains filtered purified water, green tea, black tea, sugar and cultures – all of which are organic, except the water. This is not to be confused with Holos kombucha, a British product with a much trendier-looking bottle.

The Irish kombucha drinks don’t engage in a hard sell on the label, unlike many imported brands

Holo has been around for three years, as the brothers running the brewery were looking for a new drink to add to their roster of beers. The wellness aspect appealed, they say.

Ko kombucha, which is brewed in Co Offaly, takes the prize for its very cool-looking bottle. It has similar ingredients and also is made without any artificial additives or preservatives. Like the others, it takes a few weeks to produce and is made in small batches.

The Irish kombucha drinks don’t engage in a hard sell on the label, unlike many imported brands, and are all the better for that. These drinks are expensive compared to other fizzy drinks, but they have far fewer calories and sugar.

That alone makes them a refreshing option, and, even if we can’t be sure that they do, we would hope they nurture our beneficial gut bacteria.