Everett’s, Waterford: If you cook it well they will come. They do. And we do

Review: Peter Everett charges steep prices, but this is exactly the hearty cooking I need 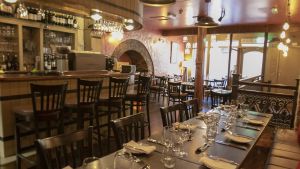 A bridal party on the steps of the hotel are making the most of the remains of the day. They’ve hit the jackpot with their Wednesday wedding in Waterford. Hours of sunny skies are deepening to photo-friendly denim blue and a rose-gold sunset promising more tomorrow.

That will be a day of the Irish countryside at its shiny, scrubbed-up best. I’ll take to the Waterford Greenway along with a smattering of Mamils, some families, runners, strollers and an older man cycling with legs akimbo at right angles to his bike as if balancing an invisible sheep on the crossbar.

But first good vittles are needed, so I’ve booked a table at Everett’s. It’s in one of Waterford’s oldest buildings. The river flowed the money into this small city and the merchants built their houses on the hills rising up from their income stream. Parts of the building housing Everett’s on High Street date back more than five centuries, according to the menu. It was built by a wealthy merchant who shipped wine from Spain.

It’s a good place for a solo dinner. The service has an unforced friendliness that feels like a welcome hug. The walls are painted the colour of terracotta flower pots and there’s a smell of roasting meat wafting between the sounds of good jazz on the speakers.

A fluffy prawn bisque the same terracotta orange as the walls is a reminder of how bisque is all about the butter, which coaxes out the prawn shells’ flavour so beautifully

The menu sounds like exactly the kind of hearty cooking I need. And we get off to a great start with house-made brown bread. It’s made with Macroom flour. Not many restaurants namecheck their flour, but Macroom deserves a mention because that nutty brown bread is terrific and served with softened butter for good measure. It has treacle in it, but only a touch that seems more for colour than sweetness.

Then there’s pork belly rolled into a succulent round. It’s velvet pork from Dave and Diana Milestone’s Andarl Farm in Co Mayo, where their pigs are raised outdoors with room to roam and pack strength and juicy flavour into their muscles. There are French coco de Paimpol beans (like baked beans, only bigger and firmer). These taste like they’ve been cooked from scratch in the kitchen and then finished in a smoked sweet barbecue-style sauce. The whole lot is topped with a gooey poached duck egg. If I have a quibble it’s that the egg could have been cooked a little more. But then there’s bacon salt on top of that just to tweak all the flavours up another notch.

We go from fields to shore for Kilmore Quay cod and fried butter crisp, teamed with a smoked aubergine ratatouille. There’s a fluffy prawn bisque the same terracotta orange as the walls that’s a reminder of how the bisque is all about the butter, the fat that coaxes out all the flavour molecules in the prawn shells so beautifully.

It’s all delivered to the table with the words: “Your cod and your buttered queens from Tom Cleary’s farm in Campile, Co Wexford.” If there’s a nicer thing to hear in an Irish restaurant the night before a long cycle than the words “your buttered queens”, I haven’t found it yet.

I finish with a reminder that we’re into the mists and mellowness of autumn, with a blackcurrant sorbet with the garden tang of leaves and nights drawing in fast. There are lovely candied hazelnuts and a lightly poached pear here too, in a dessert that’s as far from over-engineered as these things get.

Everett’s prices are steep, and yet the place is filling up on a Wednesday night with a mix of regulars and newbies

Peter Everett opened his restaurant in April 2018. Everett’s is a homecoming for the chef, who worked with Michael Quinn in Waterford and, in Dublin, in Ross Lewis’s kitchen at Chapter One and with Graham Neville when he was head chef at Restaurant 41, on St Stephen’s Green.

You don’t have to cycle off into the wild green yonder after your dinner in Everett’s, but if you do you’ll get a feel for the countryside that flows into this restaurant on a hill by the river.

Waterford has a new income stream, bringing hungry visitors to the city. Like its hill outside, Everett’s prices are steep, yet the place is filling up on a Wednesday night with a mix of regulars and newbies. If you cook it well they will come. And that’s what they do here.

Dinner for one with sparkling water and tea came to €49