If you don’t fancy three types of sugar, you may roll up your sleeves and make your own burgers 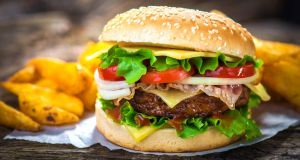 Frozen burgers: some food manufacturers are using much much more than salt and pepper as seasoning

Making burgers is the easiest thing in the world. All you need to do is form some minced meat into patty shapes and fry or grill them. You don’t even need to add flour or egg to bind the meat. A pinch of seasoning is enough. It’s messy though and handling raw meat when you are tired can be worrying.

So why not buy a packet of quarter pounders that are already in the ideal shape and perfectly seasoned? Well, because some food manufacturers’ idea of “seasoning” stretches to much more than salt and pepper.

Take Dunnes Stores Mega Irish Beef Burgers, which come in a box in the chilled section. Beside a photograph of a luscious burger on the front, it says “Made with 99 per cent Irish beef and a hint of seasoning”. So 99 per cent of the product is Irish beef, which is impressive. The “seasoning” is made up of salt, pepper, spice extracts made from celery and pepper and natural flavouring made from onion. That’s not all, however – it also includes three forms of sugar listed as maltodextrin, dextrose and sugar. Since when did sugar count as seasoning?

Check out the nutrition label and you will see each 100g of burger has just 0.5g of sugar, which really isn’t much, but it is tiresome to see food companies adding sugar to raw meat.

Dunnes also does a cheaper version in its Irish Beef Quarter Pounder with onion and seasoning. Just check out the ingredients and you will see why it costs less. It is 83 per cent Irish beef and 7 per cent onion. The other 10 per cent is made up of filler in the form of water and “rusk”, which is made of wheat flour, flavourings, dextrose and phosphates.

The burgers were produced in Monaghan for Dunnes. Hence the number IE 2038 EC can be seen inside a circle next to the weight on the packets indicating that they went through a Kepak plant there.

Centra’s Beef Burgers, with 82 per cent Irish beef, onion and seasoning, have the same identifying number and come from Monaghan too. Centra, which is owned by the Musgrave Group, may charge more for its burgers, but the consumer is getting less meat. The difference is made up in vegetables, starch and fat. They have 9 per cent onion, pea starch and beef fat, which is needed to make the starch more flavoursome. The seasoning also has sugar listed as dextrose in addition to salt pepper, yeast extract, rosemary extract and onion flavouring.

Other brands have even less meat. Birds Eye’s Original Beef Burgers, which are made in Cavan, have just 77 per cent beef and 11 per cent onion. The front of the packet says “Made with 100 per cent Irish beef” so on the back of the packet, the company cleverly explains that this means that all the beef in the patties, ie 100 per cent, is Irish. It is likely, however, that most consumers will notice the words 100 per cent on the front, not the 77 per cent figure on the back, especially next to a product listing 83 per cent Irish beef.

These patties are “beefed up” with fortified wheat flour and water. The taste is enhanced through the use of onion powder, yeast extract, celery extract, pepper extract, salt, black pepper and natural flavourings. Sugar pops up as dextrose for good measure.

A meatier option is Lidl’s Braemoor brand of Irish Angus Beef Quarter Pounders with Seasoning. Though it does not say on the front, they are 99 per cent Irish Angus Beef. The Bord Bia quality mark and number indicate the meat is processed in Cavan also. On the back of the packet, Liffey Meats in Ballyjamesduff is named.

The ingredients listed include salt, pepper and flavouring as well as the same three forms of sugar seen elsewhere: maltodextrin, dextrose and sugar. The difference here is that the nutrition label lists sugar as 0 per cent. So either there is a negligible amount or it is a mistake. The Dunnes Mega Burger with 99 per cent beef showed 0.5g of sugar per 100g of burger patty.

These burgers come in different patty sizes, package sizes and different percentages of meat so it can be difficult to compare. My vote goes to the ones without filler starches.

To decide which one is cheapest, check out the price per kilogramme as listed on the shelf in the supermarket.