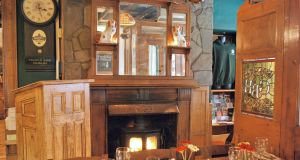 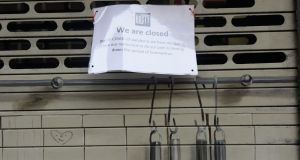 A sign at the Boxty House restaurant from earlier this year during the coronavirus pandemic. Photograph: Alan Betson/The Irish Times

The Boxty House in Temple Bar, a family-run restaurant that has been operating in Dublin 2 for more than 30 years, has closed its doors indefinitely. The business was heavily reliant on overseas tourist trade, accounting for 90 per cent of its trade in the summer months.

Owner Pádraig Óg Gallagher held back when restaurants were permitted to reopen on June 29th, and finally lifted the shutters last Thursday, in the hope that Temple Bar’s many pubs would be back in business on Monday. But with pubs now closed indefinitely, and his restaurant operating out of a largely shuttered and deserted area of the city centre, he has had to rethink.

“On Thursday, we did 24 covers in total. On Friday we did six covers, normally I’d do 400,” says Gallagher. “I had forecast to do possibly about 200 covers over the four days, Thursday to Sunday; that was what I was banking on doing. We had staff back in and we were there twidling our thumbs. It’s soul destroying.”

The Boxty House had offered a takeaway service during the Covid-19 crisis but that will not continue. “The takeaway in the city centre didn’t really work for us. The city centre is dead, completely dead.”

Instead Gallagher plans to continue to make ready-meals at the Boxty House satellite kitchens in Tallaght, and to prepare food for delivery there for a number of other food brands, in a so-called dark kitchen operation. “We are going to run a couple of brands, at least three to four brands, out of Tallaght and just go with a Cloud kitchen.” Gallagher says. He is in currently negotiations with two brands on plans to cook their food for delivery from the Tallaght kitchen. “Everything is changing. You’ve got to reinvent yourself,” he says.

It is not yet clear what will happen to the Temple Bar premises. “That’s a conversation we will have to have with the landlord. I’m there 32 years and have never missed a month’s rent. And that’s what really tears me apart.”

Meanwhile the issue of no-shows and late cancellations continues to make difficult trading conditions even more onerous for restaurateurs. After late cancellations from 15 guests on Saturday, Galway chef and Irish Times columnist JP McMahon has joined the ranks of restaurateurs now taking credit card details to confirm reservations, on the understanding that no-shows will be charged a cancellation fee. “With 40 per cent less seats and few walk-ins, we cannot absorb this,” he says of the cancellations and no-shows.

The lack of casual trade is also affecting business at Hugo’s restaurant on Merrion Row in Dublin 2. Proprietor Gina Murphy reveals that for the first two weeks of July last year, she had 843 walk-ins and same day bookings. For the same period this year, she had just 74. “I am putting together statistics from all my neighbours too, and it’s not a pretty sight.” Murphy estimates that her business is currently operating at just 30 per cent of its normal trading level,

There have been calls for an Irish version of the UK advertising campaign, #nomorenoshows, that originated in Manchester and has now spread to London, to highlight the issue. More than 450 billboards are to be erected in the two UK cities urging people to act responsibly and cancel in good time if they cannot honour a restaurant booking.

With details of the July stimulus package due to be released this week, Adrian Cummins, chief executive of the Restaurants Association of Ireland, is urging Government to prioritise a VAT reduction for hospitality businesses in preference to suggested tax rebates for expenditure on restaurants and hotels, or a Government-backed voucher scheme.

Speaking on Today With Sarah McInerney on RTÉ Radio 1 on Monday, Cummins said he believed the tax-back system was open to abuse, and urged Government to liaise with the hospitality industry to find a “fit for purpose” means of supporting the industry.