An Italian treat pops up in Dublin 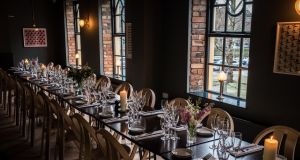 Chefs Gráinne O’Keefe and Hugh Higgins will be giving contemporary Italian food an Irish twist when the House of Peroni pops up in a new location at 130-133 St Stephen’s Green, near the top of Grafton Street, Dublin, July 5th-15th.

This will be the Italian beer company’s third temporary installation launch in Dublin, and the space will feature a terrace bar and restaurant, as well as a fashion area celebrating creativity and craftsmanship.

The food on offer will include an antipasto menu, with dishes such as Castletownbere crab and courgette flower, a bar bites or cicchetti selection including Dooncastle oysters – and a full restaurant combining both the antipasti and snacks with larger dishes to share, including a Fingal Ferguson charcuterie board. Fresh pasta will be made daily in front of the diners. “Making pasta is one of my favourite jobs to do, so the menu consists of some lovely fresh pasta dishes, smaller dishes and some sharing plates, which we hope will encourage people to share,” Higgins says.

O’Keefe, who is head chef at Clanbrassil House, and Higgins, who was formerly head chef at Luna, devised the menu together. Higgins is taking on the role of food curator and head chef for the two-week residency.

The House of Peroni will be open to the public, and no reservations are required.

Institute of Technology Tallaght is offering a new honours degree in botanical cuisine, the first of its kind in Europe, in partnership with Airfield Estate in Dundrum, Dublin.

The one-year part-time course is designed as an add-on (level 8) for those who have completed a culinary arts (level 7) degree, and will also be open to chefs already working in the food industry.

The theory and practice of vegetable and fruit production is at the core of the curriculum, and other topics that will be covered include wild foods and foraging, methods of preserving food to minimise waste and plant-based menu development.

“There is a need for greater understanding by chefs of the natural ingredient, how it is grown, when it is grown and what influences the finished plant,” says Annette Sweeney, culinary arts programme co-ordinator at the IT. The programme starts in September and applications are now being accepted. Further information is available from Tom Meaney at IT Tallaght (01-4042830; tom.meaney@it-tallaght.ie).

The Legal Eagle, winner of the title of Best Gastro Pub in Ireland at the Irish Restaurant Awards, is hosting a brewer’s lunch in conjunction with Tallaght’s Priory Brewing on Sunday, June 24th.

The collaboration between the pub and restaurant and the microbrewery is to mark Indie Beer Week, a nationwide initiative that runs June 22nd-July 1st.

The brewery’s Venial Sin Session IPS and Original Sin IPA will be poured, as well as used in the preparation and cooking of the lunch, which will feature ox tongue fritter with Kearney Blue and beer mayo, and a beer-basted Sunday roast served with the pub’s home-made beer mustard, with beer ice-cream cones for dessert. Vegetarians can look forward to Toons Bridge burrata, and salt baked beetroot with whipped ricotta and black garlic.

Although raised in Devon, Labron-Johnson gained most of his cooking experience in Switzerland, France and Belgium, where he worked for six years. Fermenting, pickling and curing are signatures of his cooking style. The demonstration will run from 1pm-5pm and the €145 fee includes lunch. See cookingisfun.ie.

Barbecue-ready, marinaded pork belly slices from Aldi are a handy standby at this time of year and were a standout product at a recent tasting. The meat comes from Bord Bia quality-assured suppliers, and is marinated in either a salt and chilli or a teriyaki mix. If you are oven-cooking them, raise the heat a notch above the 200 degrees suggested to get a nice crisp finish on the slices. They are in store now, and 500g packs cost €2.99. The Irish pork collar chops with sticky maple or Kentucky bourbon marinades (€2.49/375g), are also worth trying.