Smart, thoughtful and articulate, Bourdain cast a cold an eye on celebrity culture, but he also had his demons

The former chef turned writer and TV host exposed the underbelly of restaurant culture and took viewers on far-flung culinary adventures with biting wit and a worldly outlook. Video: The New York Times 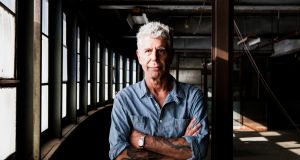 Anthony Bourdain: “Where are all the old chefs? Like old pigeons, you don’t see them. So they’re probably dead.” Photograph: Alex Welsh/The New York Times

There was only one question during the interview that stumped him for a second. “Why are people so fascinated by chefs?” I asked Anthony Bourdain on a summer’s morning in 2010 over mugs of coffee in the RTÉ canteen.

“I’ve discussed this with chefs many times,” he said after a pause to puzzle it out. “In our private moments we’re baffled by it. We’re so used to being marginal characters on the fringe of society. To suddenly be the focus of attention is still baffling. Something happened.”

Bourdain was a large part of the something that happened. In 2000, Kitchen Confidential gave him a writing and TV career at the age of 44 when he was beginning to feel old by kitchen standards. In the Montrose canteen that day, he asked where are all the old chefs. Like old pigeons, he said, you don’t see them. So they’re probably dead.

He loathed restaurant critics, one in particular to whom he devoted a whole chapter

He was in Ireland for a day on a book tour for Medium Raw, his follow-up memoir to Kitchen Confidential. Never ordering fish on Mondays and always avoiding well-done steak were the two pieces of insider information Kitchen Confidential turned into restaurant lore. Monday fish was always less fresh, he explained, and a well-done steak was always an inferior piece of meat the kitchen was happy to char for the chump who’d ordered it.

His writing was his passport into a new world of travel, TV and rubbing shoulders with the rock star egos of the world-famous chef brigade. The wise-cracking, truth-telling, profanity-laced voice came through on the page almost unfiltered.

He was the Tom Wolfe of memoir, bringing a “new journalism” grittiness to the genre that put the reader right into his sweaty too-tight shoes at the end of a shift. Reading Bourdain was like having a drink with a gimlet-eyed insider, a secret kitchen anthropologist who spent more time studying his co-workers than he did eyes down finessing his knife skills.

He played the sceptical outsider (the first chapter of Medium Raw is called Selling Out) and in his follow-up memoir, he cast just as cold an eye on celebrity culture as he had on the New York restaurant kitchen, where drink, drugs and sadistic machismo reigned.

A decade on from Kitchen Confidential he seemed slightly embarrassed by his million-selling memoir, as if it was written by a teenage self rather than a forty-something man with two novels behind him. He was clear-eyed about his success. You could insult him, he suggested in Medium Raw, by describing him as “a loud egotistical, one-note asshole who’s been cruising on the reputation of one obnoxious, over-testosteroned book for way too long and who should just shut the f**k up.”

He loathed restaurant critics, one in particular to whom he devoted a whole chapter, and made a convincing argument that the gig would be history as an army of bloggers ate their way across every corner of the globe, reviewing for free. On his blog before our interview in 2010 he talked about his delight at being out of the US while a show about him was airing on TV.

Even on the book tour treadmill, Bourdain came across as a smart, thoughtful man, as articulate in speech as he was print. He seemed comfortable in his skin, delighted at fatherhood and happily married to his then wife Ottavia Busia. He joked about warning over-attentive female fans that Ottavia was a kick boxer. She later became a mixed martial arts fighter. He was happiest during that interview talking about their daughter.

He took his time signing my book as we finished up. When I opened it later he’d drawn a chef’s knife on the title page, scribbles of blood dripping down from its blade on to his signature. This was a set of frenetic circles with a lower case ‘a’ and upper case ‘B’ just decipherable. He pressed down so hard with the pen the impression of knife and name was pressed on to the next blank page. He never did things by halves it seemed, even signing books for someone he’d likely never meet again. “Those were some good questions,” he said as we shook hands.

Medium Raw ends with a meditation on kitchen life. He didn’t miss it, he wrote. What he missed was the camaraderie of the crew and sitting down to a cold beer after work. It’s the note he chooses on which to end the book, as close to sentimentality as he ever let himself get. The first pull on that cold beer . . . “that’s the kind of satisfaction no bestseller can ever beat – no television show, no crowd, no nothing . . . Once again. We survived. We did well. We’re still here.”