The former chef turned writer and TV host exposed the underbelly of restaurant culture and took viewers on far-flung culinary adventures with biting wit and a worldly outlook. Video: The New York Times 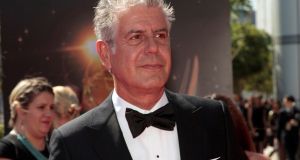 US celebrity chef and television host Anthony Bourdain has died at the age of 61, CNN said on Friday.

The American chef, author, and television personality first rose to prominence following the publication of his book Kitchen Confidential: Adventures in the Culinary Underbelly in 2000. He subsequently presented food travel shows, including A Cook’s Tour, Anthony Bourdain: No Reservations, The Layover for the Food Network and the Travel Channel, and most recently, Anthony Bourdain: Parts Unknown after joining CNN in 2013.

“His love of great adventure, new friends, fine food and drink and the remarkable stories of the world made him a unique storyteller,” the network said. “His talents never ceased to amaze us and we will miss him very much. Our thoughts and prayers are with his daughter and family at this incredibly difficult time.”

The cause of death was suicide, the network said in a statement.

He was found dead in a hotel room in Strasbourg, France, where he had been working on an upcoming episode of Parts Unknown, the network said.

Helen Rosner, New Yorker food correspondent, said of Bourdain’s death: “Tony always made fun of me because I had a hard time calling him Tony – he’s Anthony Bourdain, the whole name. His death is an inexpressible tragedy.”

I can't think of a more universally loved and respected chef than #anthonybourdain That has hit me today. Literally just heard. Kitchen Confidential was our bible. Passed around amongst all my crews. What a loss to the culinary world. RIP @Bourdain Truly heartbreaking

To you Anthony ,cheers for sharing your wit and macking us cry with laughter. pic.twitter.com/e3iUaGKNEp

What is this incredibly, unthinkable sad news of Anthony Bourdain? He last ate here with A A Gill. It’s unbearable they both be gone. Shocked and saddened xxxx

Stunned and saddened by the loss of Anthony Bourdain. He brought the world into our homes and inspired so many people to explore cultures and cities through their food. Remember that help is a phone call away US:1-800-273-TALK UK: 116 123

In Ireland, chefs have been reacting to the news on Twitter. Chef Wade Murphy of 1826 Adare tweeted: “Shocked to hear of the death of Anthony Bourdain. Loved his shows and loved Kitchen Confidential, one of the first books I read that I didn’t want to put down. #ripbourdain

Chef Gary O’Hanlon tweeted: “I can’t think of a more universally loved and respected chef than #anthonybourdain That has hit me today. Literally just heard. Kitchen Confidential was our bible. Passed around amongst all my crews. What a loss to the culinary world. RIP”

In his first profile in the New York Times in 1997 – where author Enid Nemy called him “a chef with a checkered past, a peripatetic career and no writing experience” – Bourdain said: ‘There’s a lot of similarity between writing and cooking. Both require endurance and consistency, and both are show business in a way.’’ The chef saw one difference from his assurance in the kitchen, though: ‘’Doubts gnaw at me when I’m writing,’’ he said. “Doing the actual work is tough.’’

Chef JP McMahon, owner of Michelin-starred Aniar restaurant in Galway, told the Irish Times: “It is deeply sad to hear about the passing of Anthony Bourdain. He greatly affected my generation of chefs for the better, with his honesty and the ways in which he elevated the role of the chef. As a writer and a presenter, he knew no bounds in terms of food.

“He changed the culture of the kitchen as much as Marco Pierre White. As someone also affected by depression, his suicide is deeply troubling. We need to think more about mental health in our industry.”

Speaking to The Irish Times, restaurateur Joe Macken said: “Such sad news about Tony Bourdain, especially as he was travelling with his very close friend and fellow chef Eric Ripert. I met both of them in the Cayman Islands a while back.

“Even when he spent time here in Dublin it was clear the strain he was under, being away from home and family 250 days a year.

“It’s hard to believe in some ways that I spent a weekend hanging out with my hero, showing him my restaurants, going for pints in the Long Hall and Hogan’s, meeting two lads in the street and going for a wharly burger in the Roma II on Wexford Street – places unknown in a way. He wanted to try everything. It was as if he was understanding where he was in what he ate.”

Although Macken found the chef was not what he had expected. “He was not the person I loved on screen. He was sharp, quick, easily bored, frustrated and in some ways brutish. But a product of working, travelling, writing, being away from home and family for most of the year. It was hard to spend time with him, I couldn’t relate to him in person, but his writing, his TV, he is . . . was a hero to me.”

Stuart Clark, who interviewed Bourdain several times for Hot Press, where he is deputy editor, described him as “a tough-talking New Yorker with a marshmallow heart. He was a lovely guy and outrageously good company. His passion for food and general lust for life shone through.” – Additional reporting: Agencies

Tesla’s next-gen Model X: A frustrating €95k drive – but everyone else will love it
9