Anthony Bourdain: ‘To suddenly be the focus of attention is still baffling’ 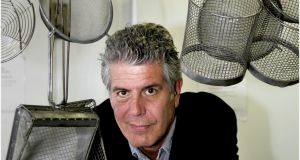 IT’S A SUNNY morning in book tour land and Anthony Bourdain is drinking a cup of canteen coffee in Montrose and answering a question about celebrity chefs for the umpteenth time. An hour earlier, he was on the TV3 morning couch in west Dublin. Now he has been whisked to RTÉ for his next interview. They are taking him to dinner tonight somewhere in Dublin, he thinks.

It’s the nature of a book tour, a child-like state where you are minded and moved around a familiar circuit of sameness, hotel rooms, studios, planes, restaurants and questions. He doesn’t look tired or bored. He’s pretty happy in his skin.

The long black hair you might remember from the cover shot of his breakout book, Kitchen Confidential, is now short and silvering. He twists the wide wedding band on his smooth brown hands when he thinks. This is a golden life compared to where he might have ended up if he hadn’t written the more-than-a-million-selling account of backstage life in New York restaurants a decade ago. There are no old chefs, he says, they’re like old pigeons. Where are the old pigeons? Dead probably.

Bourdain’s latest book, Medium Raw: A Bloody Valentine to the World of Food and the People who Cook, is that difficult second album, a follow-up memoir. There have been other books, two novels before Kitchen Confidential and three other books since about food. But Medium Rawdescribes the privileged and often-weird world he entered on the back of what he now describes as the “obnoxious and over-testosteroned” book.

When I wrote Kitchen Confidential the reader I imagined was my fry-cook.

The pirate swagger of Kitchen Confidential has been replaced with an older, more soul-searching viewpoint. He is almost embarrassed by his younger, brasher self.

Nonetheless, Medium Raw takes a similar backstage, truth-teller approach to the powerful circles, world-class restaurants and the business demands of fame in the food world. He plunges his literary knife into the hearts of his line-up of villains, devoting one chapter, for instance, to the skinning and filleting of one food critic who got his goat.

He is bemused when I admit to reading Kitchen Confidential after finishing Medium Raw. “I can’t imagine how that must be,” he says.

Both books are written in the same pithy prose, with laugh-out-loud one-liners. His writing regime is close to the routine he followed as a chef. He gets up at 5am and writes until he can’t write any more. If he hasn’t written in the morning, he won’t write that day, he says.

“When I wrote Kitchen Confidential the reader I imagined was my fry-cook. My only concern was that other cooks in the New York tri-state area would find it to be funny and true. My highest hope was that it would sell enough copies, in a minor cult way, that I might get the opportunity to write another book.”

Is he upset his fiction sank without trace while his memoir dominated bestseller lists? “No. I’ve never written a book where I didn’t have a deal before. I didn’t have time. I didn’t delude myself that I was going to write my way out of poverty. The restaurant business is filled with aspiring writers and aspiring actors and I knew what the chances were.”

Bourdain is much more polite in person than in print. It’s 10 minutes before we get the first f-word and even then he is quoting someone else, the lighting cameraman who came up to him at the Emmys and told him how effing awesome his one-off black-and-white food show No Reservations in Rome looked.

So what about those celebrity chefs then, the creatures who have emerged to take over the world in the past decade? “The celebrity-chef phenomenon has empowered chefs,” he says. “It has made them figures that people actually care about and are interested in. That was never actually the case before.”

It’s ironic that chefs now live or die on their communication skills, he argues, “because most people who got into the business sensed in themselves some unease with the real world, or often very poor communication skills. A very large number of chefs are dyslexic but they’ve had to master that and learn to hustle.”

Why are people so fascinated by restaurants? “I don’t know,” he says sounding genuinely mystified. “I’ve discussed this with chefs many times. In our private moments we’re baffled by it. We’re so used to being marginal characters on the fringe of society. To suddenly be the focus of attention is still baffling. Something happened.

He is still “stunned” that all the coolest food people wanted to be his friend after Kitchen Confidential came out. He became a poster boy for the galley-slave chef who worked a double shift and then couldn’t come down from the adrenalin rush with anyone other than fellow chefs.

“I’m very good friends with Marco Pierre White. He’s my hero. I know all these chefs who never in a million years would have hired me, who I would never have dreamed I would have met. I never thought I’d see Rome, or Hong Kong. Now I sit around with my friends drinking beers saying, let’s go to Brazil.”

The boyish delight in his privilege was accompanied by a jading of his palate for the kind of food he was trained to cook. In the book he recounts in graphic detail what a tasting menu can do to your digestive system.

Hard times are good for cooks. It forces them to be creative

“I called that chapter ‘It’s not you. It’s me’ because it says something sad and terrible about me. I am jaded. I’ve had too many of these meals. That doesn’t reflect well on me. But that’s a fact.”

How does he view the Irish restaurant scene? “The raw ingredients are so awesome here. You have everything you need for a great food culture, great raw ingredients, great artisans – the cheeses are spectacular in this country – the seafood, the game.

“You have a lot of good chefs and you don’t suffer from the burden of years of successful pre-eminence, in a lot of ways in the same way the States benefited from not having these old French guys saying, ‘You must do it zis way.’

“The French are only now emerging from that 20 years of moribund food culture, only now are they breaking out of it. Anything’s possible here.”

Even in a recession? “Hard times are good for cooks. It forces them to be creative. It allows them to move away from the tyranny of sirloin steak and expensive ingredients towards the sort of hoof and snout dishes that, for me, are central. It forces them to think out of the box. It makes fine dining more democratic.

“Look at Paris right now. The latest thing is bistronomy. Hot-shot chefs have completely rejected fine dining, Michelin-type dining rooms, and are running these little bistros – one chef, one cook and a dishwasher – doing Michelin-quality food for €40, four courses. It’s not a big slab of meat. But it’s delicious, great ingredients. The first thing that goes is the bulls**t: the linen, the crystal, the 20 waiters, the attitude. We can spare that.”

Along with many chefs, he is moving away from fussy drama to simple eating. “As the years go by I think chefs, in general, move farther away from it. I’m happiest in Italy with my wife’s family and eating this really rough grub and wine, crude country stuff. I need to suspend the analytical part of my brain. And when I do that, when I become goofy and romantic at a table, I can still be swept away.”

He also loves the democracy of Italian food culture. “This foodie-ism can be a way of dividing people. There’s a risk that a passion and fetishisation of food is used by people as a means of separating themselves.

“The way Italians do food is that good food and local ingredients are considered a birthright. This is not rich or poor. No one would eat a tomato out of season. It think that’s a healthier attitude and that’s one that will come about over time.”

Next week his heart will crack a little when his three-year-old daughter heads out the door to her first day at pre-school. ‘‘She’ll bring a lunch box. I’m guessing it’ll be Italian – proscuitto, a little cheese, maybe some cold pasta.”

Fatherhood is something that took him 50 years to be ready for, he says. He once declared to a journalist that parenthood was something he never wanted, that he would have made a poor parent. Now he’d happily have more children.

“I love everything about her and I want more of that.”

What if she turns around and tells him she wants to be a top chef in the future?

“I would be horrified. I would be terrified, horrified, oh my God,” he says and pauses. “Then slowly there would be a creeping pride and I would be thrilled and delighted and proud that she would choose to be something so hard. I’d be much more upset if she said she was going out with a chef. ‘Meet my new boyfriend the chef.’ Oh no. I’d kill him. Torture him slowly to death.”

A family favourite cake, piled high with the best of berries
Real news has value SUBSCRIBE