The sprouts, the roasties, the bird and the ham. This guide will get you through 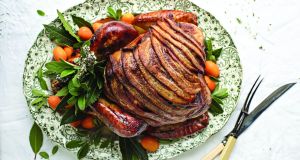 You can now count the hours before Christmas lunch is served.

If you’ve never before attempted the juggling act that getting this feast to the table can become, you’ll need the help of a fail-safe recipe or two. To the rescue, Neven Maguire and Darina Allen, two of the country’s most trusted authorities when it comes to writing recipes that home cooks can replicate.

But before you even begin to prepare that big bird that is probably already residing in your fridge, I’d read these words of wisdom onturkey cooking times from John McKenna. The type of bird you are cooking, whether or not it has been frozen, and the size of your oven, all come into play when determining cooking times.

Inserting a skewer into the thickest part of the thigh and checking that the juices run clear, not pink, is the way most cooks check that their bird is done. But, as McKenna recommends, buying a meat thermometer and checking that the meat has reached 70 degrees Celsius, will take all the guesswork out of the equation.

It also helps to write out a timetable, working backwards from when you want to serve the meal, building in time for the turkey to rest (again depending on its size, but anywhere between 30 minutes and two hours), and listing all the side dishes and when you’ll need to start cooking them.

For explicit instructions on how to roast the bird, Neven Maguire’s recipe for roast turkey with streaky bacon, from his new book, Neven Maguire’s Perfect Irish Christmas, is about as straightforward and reliable as they come.

You’ll also find instructions for Maguire’s Christmas gravy in that link, but note that you’ll need a pint of turkey stock, and that is best made in advance. Do so by simmering the giblets (make sure to ask your turkey supplier to include them) in water with an onion, a carrot, a celery stick, six black peppercorns, two bay leaves, and a few thyme leaves and parsley stalks, for an hour, then straining. No giblets, or can’t stand the thought (and smell) of that simmering pot? Use a good quality chicken stock cube or powder instead.

For some, Darina Allen is the highest authority on home cooking, and her classic roast turkey with stuffing and gravy recipe has legions of fans. Her recipe also gives instructions on making turkey stock, for the gravy, and bread stuffing, which she cooks inside the bird. This is a comprehensive and ultra-coherent, step-by-step guide, perfect for the first-timer.

Irish Times columnist JP McMahon believes that we don’t need roast potatoes as well as mashed on our Christmas plates, but he is a bit of a contrarian – he serves tiramisu instead of plum pudding, after all. Here is his ultimate mashed potatoes recipe.

But for most of us, crisp, burnished roasties, maybe cooked in duck or goose fat, or in James Whelan Butcher’s award winning beef dripping, are an essential part of the roast dinner to top all roast dinners. Here are chef Gavin McDonagh’s instructions for beef dripping roasted spuds. Alternatively, try these goose fat roasted potatoes, with garlic and thyme.

Sprouts, whether you like them or not, and many of us do not, are often unavoidable on December 25th. Many cooks go to great lengths to make the cruciferous vegetable more appealing by adding other flavours. Lilly Higgins serves her sprouts roasted, with tahini sauce. Vanessa Greenwood stir-fries her sprouts with smoked bacon and wine. Domini Kemp goes for shredded sprouts with truffle oil.

But sometimes simple is best, and lightly cooking the sprouts in salted water, before tossing them in lots of butter, is the purist’s approach. They can be parboiled, or steamed, in advance, and reheated in foaming butter just before serving.

Is bread sauce an integral part of an Irish Christmas feast? A poll of Irish Times colleagues failed to find consensus on this matter, with strong feelings and feisty opinions on both sides.

For a recipe for this rather odd amalgam of white breadcrumbs, milk, onion and butter, we had to look outside the Irish Times recipe archive, and who better to consult than Delia. Her traditional bread sauce recipe is a luxurious version, with full-fat milk and added cream.

‘I make myself small and stay quiet’: Experiences of racism in Ireland
7