Suffering from acute Christmas Dinner Syndrome? You are not alone

Can anything explain the enormous divergence of opinion among prominent food writers on the simple matter of roasting the Christmas bird? 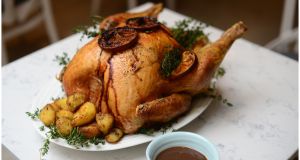 'If food writers disagree on the time it takes to cook a turkey, then surely the big meal of the year will be a mess.' Photograph: Bryan O’Brien

That pressure you’re feeling? The anxiety that’s waking you up at night? Don’t worry, because you’re not alone. A significant percentage of the population is feeling exactly the same way – nervous; adrenalinated; a little fearful.

It’s just the Christmas Dinner Syndrome, and it strikes at the same time every year – around the middle of December. And it does your head in.

The reason why is simple – few of us in Ireland have much experience of cooking for large numbers of people. And then, just at that point when we have a million things to do, we also have to plan an epic feast, and one that takes into consideration every culinary foible of your family – Uncle Harry doesn’t like stuffing; Donal doesn’t eat meat; Patricia says she can’t touch gluten; Granny has always hated sprouts.

A challenge like this should come with a health warning – even just trying to satisfy everyone will make you ill.

Unfortunately, that isn’t the only problem. If you go looking for answers to the big question of the day – exactly how long should you cook that big, ginormous turkey? – the confusion multiplies exponentially.

Neven Maguire says you will need 20 minutes per pound for a 12lb bird at 190C, plus 20 minutes, which is even longer than Mary Berry’s timing.

Darina Allen, then, knocks an entire hour off Neven’s estimation, reckoning the 12lb bird is done in three hours. Jamie Oliver agrees with Darina, and both roast at 180C.

But Alice Waters reckons the bird only needs 12 minutes per pound at 180C, so her 12lb turkey is done in two hours 25 minutes.

Confused? You should be. No wonder you’re feeling anxious.

Can anything explain such an enormous divergence of opinion on the simple matter of roasting the Christmas bird? Doctors disagree, and patients die. But if food writers disagree, then surely the big meal of the year will be a mess.

Two factors explain the confusion: the food writers don’t know what sort of oven you have; and they don’t know where you bought your bird.

If you cram a great big turkey into a standard oven, where there is suddenly less room for air to circulate around the bird, then cooking times go awry. And if you have a frozen bird, it cooks differently to a bird that was running around a field two weeks before Christmas, and has never been frozen.

So, for the sake of our anxiety as we head towards the big day, how can we get some certainty?

The answer lies in testing temperature, and not worrying about time. With different ovens and different birds, just accept that the only reliable rule is to bring the internal temperature of the turkey to the point where it is cooked.

And all you need to do that accurately is a meat thermometer, a cheap, simple electronic device. If you don’t have one, start dropping hints now about what you would like to find in your stocking on Xmas morning.

With a farm-raised bird, writers such as Nigel Slater and Jamie Oliver are happy to take the turkey out when it reaches 65C, knowing that as the bird rests, the temperature will continue to rise by at last another two degrees.

For them, the key element is letting the bird rest for a good period of time: 45 minutes tightly wrapped in foil will see the meat continue to cook, and relax, so that it is easy to carve. It will also give off lots of tasty juices to add to your gravy.

If you have a frozen bird, make sure it’s at room temperature to start, then remove and rest when the thermometer reaches 70C.

Giving yourself plenty of time for the resting means your oven is also free to finish off the spuds and the other bits and pieces you want to roast.