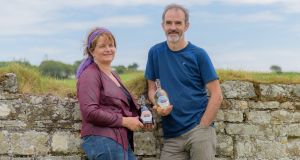 Kate and Denis Dempsey: Their Kinsale Mead Co is producing two varieties of the beverage – a white and a red, both with a 12% alcohol content.

Kate and Denis Dempsey aren’t quite turning water into wine, but they are transforming honey, water and yeast into mead, the world’s oldest alcoholic drink.

Their Kinsale Mead Co is producing two varieties of the beverage – a white and a red, both with 12 per cent ABV – in a new meadery in the Co Cork town. Atlantic Dry Mead is made with Spanish orange blossom honey and Wild Red Mead is based on Spanish forest honey.

Kate, who previously worked in IT and is also a poet, and Denis, an engineer, went into production in February of this year. Their mead ferments in three-five weeks, and is allowed to mature for a further three-five months before being blended and bottled.

The white, which can be served chilled, over ice or with tonic, has “notes of citrus with ripe apples, and a touch of softer pears and white fruit”. They say it pairs well with olives, pear and blue cheese salad, and fresh seafood.

The red has cherries and Wexford blackcurrants in the mix and can be served at room temperature or with ice. The couple suggest serving it with cold meats, barbecue ribs, or as an accompaniment to a cheeseboard and grapes.

Hour-long tours of the meadery, with tastings and food pairings, cost €12 and are available at 1pm and 3pm Friday-Sunday until April and daily thereafter. The mead costs €22 a bottle and can be purchased online at kinsalemeadco.ie, from independent off-licences and some SuperValu branches in Cork, where it is included in the Food Academy listing.

Finding a convivial space to meet up with friends and family over the coming days can be a problem, with restaurant tables hard to come by and bars bursting at the seams.

However, the Marker Hotel on Grand Canal Square, Dublin 2, is offering seasonal specials in both its rooftop and ground-floor bars. Both have The Twelve Days of Christmas as their theme and several dishes are paired with a glass of Bollinger champagne.

While looking out over the city from the rooftop bar, you can order from a range of small plates (all costing €12), including duck spring rolls with star anise and orange, and chicken drumsticks with sage and lemon mayonnaise. A glass of Bollinger can be ordered with a dish of smoked salmon and cheese straws (€24), or a choux pastry swan (€24).

In the lobby bar, you can order a sharing board to keep hunger at bay for two or three people, with those spring rolls and chicken drumsticks, plus duck fat roast potatoes, rabbit pie, partridge sausage rolls with pear chutney, and pheasant, duck and pigeon croquettes with roasted garlic aioli (€40).

Vegan at the double

Jamie Oliver’s 5 Ingredients has been a publishing phenomenon this autumn, and hot on its heels comes Vegan in 7, from Dutch food blogger and photographer Rita Serano, with photography by Laura Edwards (Kyle Books, £16.99).

Over the years, Serano has followed various diets, from macrobiotic to raw food. But the desire to have healthy family meals on the table quickly – and hot ones too, for when winter bites – inspired this collection of recipes that don’t involve a long list of ingredients.

There are several stand-out examples, such as the oatmeal and banana cups , made with oats, bananas, dates and vanilla – blitzed, then formed into something akin to thumb-print cookies and baked before being fill with natural yoghurt and chopped fruit. Aubergine escabeche, with steamed aubergines and sliced red onion marinated in an aromatic red wine or apple cider vinegar, also wins points for originality.