From The Irish Times’s Delicious List 2019: Our go-to informal restaurants and bars 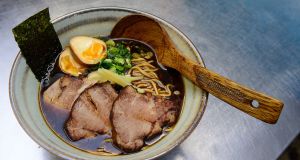 Bia Rebel NEW
409 Ormeau Road, Belfast; 048-7933861720
Jenny Holland and Brian Donnelly taught Irish eaters that you cannot overthink ramen. It has lots of moving parts, and when each one is exquisite you’ve nailed it. Donnelly, a chef with a fine-dining background, brought damn fine ramen to Belfast’s Ormeau Road, and later this summer there’s word of a road trip to Ballydehob, in west Co Cork, with a ramen food truck, as if west Cork weren’t lucky enough already. Start queuing, folks. Catherine Cleary

Tartare €
56 Lower Dominick Street, Galway; 091-567803
JP McMahon (an Irish Times contributor) has created a cool, unpretentious room where great flavours in wine and food can be enjoyed without having to pull up a table and tuck your knees under a white tablecloth. It’s a sign of how far we’ve come that cooking of the standard the Tartare team maintain can be served in a relaxed bar setting. Deliciousness does not have to come with a side order of formality. CC

Dooks Fine Foods
Kerry Street, Fethard, Co Tipperary
There are lots of Yotam wannabes who think a pomegranate seed and a squeeze of lime will cut it. Then there’s a band of Irish chefs who worked for Yotam Ottolenghi’s London restaurants and cafes and get that it’s all about the best ingredients worked until they produce the best flavours. Richard Gleeson came home to Fethard to open Dooks, a brilliant addition to this lovely Tipperary town. CC

Wine & Brine
59 Main Street, Moira, Co Armagh; 048-92610500
Restaurants are canaries in the mine when it comes to chilly economic breezes, but, as we saw during the last crash, tough times can produce impressive cooking. As a restaurant in a small town over the Border, Wine & Brine has to work hard to provide value for local customers and attract visitors. This, as a certain guide might say, is a restaurant worth the trip. CC

Terra Madre
13a Bachelors Walk, Dublin 1; 01-8735300
There’s no such thing as Italian food, any Italian worth their salt will tell you. It’s all about the regions, and every village within each region has its own way of doing things. Terra Madre was the original band of friends who wanted to introduce Dubliners to the tastes of their home. The name means mother earth. Down here, she’s a hugger. CC

Las Tapas de Lola €
12 Wexford Street, Dublin 2; 01-4244100
If Vanessa and Anna, the owners, had their way, there would be no seats in their restaurant, just a bar, and a sawdust-covered floor, where delicious small plates are casually served alongside fino and wine. Their Irish customers wanted sit-down dining, so they complied. The welcome is as large as the menu. They serve all the best tapas without the step count that would be clocked up to eat like this on a tapas strip in Spain. CC

Grano NEW
5 Norseman Court, Manor Street, Stoneybatter, Dublin 7; 01-5382003
An Italian mother shepherded this brilliant Stoneybatter restaurant into being in the depths of an Irish winter when she flew in with a suitcase of stiff grass stems for rolling the handmade fileja pasta. Roberto Mungo’s mother has gone home, but her stamp remains, and Grano has been the best addition to Stoneybatter since L Mulligan Grocer opened its door. CC

Restaurant 1826 Adare
Main Street, Adare, Co Limerick; 061-396004
As Limerick’s reputation for good food continues to grow, the chef who brought his skill to the area, Wade Murphy, continues to do what he does best in this lovely roadside restaurant. The roof may be thatched but the methods are very much today, and Murphy is fanatical about local ingredients and a great ambassador for Irish food. CC

Brownes of Tuam €
The Square, Tuam, Co Galway; 093-60700
Once this small-town pub got its fame from a Saw Doctors song. Now it’s known for the cooking of Stevie Lane, the grandson of the original owner. Stevie and his wife, Amanda Fahy (who met working in the bar), turned the lights back on in Brownes in 2016, with a shoestring refurbishment to allow them to put all the fun into the food, bringing sweetness back into the sugar town that is Tuam. CC

The Universal € NEW
9 William Street West, Galway; 091-728271
Conor Lynam of Bierhaus, in Galway, launched the Universal, a hybrid of chic bar and small-plates restaurant, in late 2016. The head chef, Matt Davis, serves small plates with universal influences. Regular dishes include squid tentacles with miso mayonnaise, and fried nems (otherwise known as spring rolls) with a Vietnamese dipping sauce. Vegetarians will love the paneer kofta with a cashew coconut curry or the grilled fresh cheese with aubergine puttanesca and fried tempura leeks. A menu with too many influences can easily feel disorganised and unfocused, but Lynam and Davis pull off a global reach with easy-going finesse. Aoife McElwain

Pi € NEW
10 Castle House, 73-83 South Great George’s Street, Dublin 2
Pi casually slid on to the Dublin pizza scene last summer and within weeks had detonated a debate about whether it was the best pizza in the city – we were in the affirmative camp. Pizzaiolo/owner Reggie White worked in an office before jacking it in to train with Darina Allen at Ballymaloe, and his obsession with pizza is evident from the first bite of the leoparded, 48-hour fermented base, with its punchy sun-ripened-tomato sauce and creamy, tangy Toons Bridge Fio di Latte on the most simple, perfect Margherita. Lisa Cope

Uno Mas NEW
6 Aungier Street, Dublin 2; 01-4758538
Etto was always going to be a hard act to follow, but owners Liz Matthews, Simon Barrett and chef Paul McNamara have made it look effortless. This Spanish-inspired restaurant feels more like Barcelona than Aungier Street, and the bar seating is some of the best in the city. The gildas (Spanish “lollipops” with guindilla peppers, anchovies and olives), chargrilled octopus and flan de queso are unmissable. LC

Loose Canon € NEW
29 Drury Street, Dublin 2
Loose Canon is Dublin’s temple to natural wine, and the daily changing small plates have been put together with as much thought as the wine list. Cheese and charcuterie are always seasonal and in peak condition, and small plates feature predominantly Irish ingredients, with occasional curveballs, like Toons Bridge ricotta topped with Goatsbridge trout caviar. If you’re on a budget, the toasties are an excellent way to get fed and still have change from a tenner. LC

Host NEW
13 Ranelagh, Dublin 6; 01-5612617
Host is like a chink of a much more cosmopolitan city shining through the suburban Dublin village of Ranelagh. They follow the winning neighbourhood formula of sharing plates, natural wine and sharply dressed staff, but the handmade pasta and general vibe that your wish is their command tip it over the edge. A Host in every neighbourhood would do much to alleviate the stresses of modern life. LC

Etto
18 Merrion Row, Dublin 2; 01-6788872
Got a birthday coming up? Go to Etto. Anniversary? Etto. Want to cheer yourself up with a fantastic lunch on a rainy Monday? Etto. Has a restaurant ever been as loved in Dublin before? It seems to be everyone’s favourite (everyone who has eaten there anyway), and they rarely (ever?) put a foot wrong, with their seasonal, modern Italian/Irish menu, eclectic wine list and sunny staff. LC

Bastible
111 South Circular Road, Dublin 8; 01-4737409
Barry Fitzgerald and Claire-Marie Thomas’s neighbourhood bistro has been a cornerstone of the Dublin dining scene since opening, in 2015, and is a major part of the new wave of restaurants taking the capital up several notches on a globally recognised level. It’s still as good as ever and not sitting still for a second. Sunday lunch here is the ultimate reward after a trying week. LC

Clanbrassil House
6 Clanbrassil Street Upper, Dublin 8; 01-4539786
Head chef Gráinne O’Keefe, one of the young guns of the Irish culinary scene, only seems to be getting better and better. Clanbrassil House is about sharing plates, mainly cooked over fire, great wine and a team that aren’t interested in playing it safe, making it one of the most exciting restaurants in the city. LC

Mr Fox
38 Parnell Square West, Dublin 1; 01-8747778
There’s a quiet confidence about Mr Fox – you’re unlikely to hear them shouting about how great they are any time now – which makes the food an almost shockingly fantastic surprise when you get there. Every element on every plate has a reason for being there, and the nostalgia-laden desserts, like the super split and the coffee iceberger, are a joyful way to end a meal. LC

The Old Spot NEW
14 Bath Avenue, Sandymount, Dublin 4; 01-6605599
The days of the gastropub seem to have come and gone, but the Old Spot would make you beg for their return. Fiachra Kenny’s food always seems to overdeliver (the Kilkeel crab risotto is a particularly fond memory), the wine list is better than a lot of high-end restaurants’, and the charming staff seem to love working there. If only every neighbourhood had one. LC