Now We Know: Perhaps what we should really be calling this dish is Roman toast 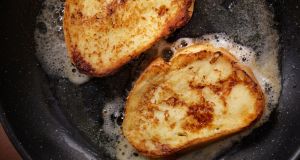 French toast, by any other name, would still taste as sweet. Which is just as well because this brunch classic of bread soaked in eggs and milk, then fried, goes by quite a few different names.

Anglo-Indian menus might list Bombay toast as a brunch special, while in Hungary you might find yourself ordering furry bread, or in UK the poor knights of Windsor. In Spain the Easter treat known as torrijas is stale bread soaked in milk or wine with honey and spices before being dipped in beaten egg and fried in olive oil. In Hong Kong a Cantonese version of this dish is known sai dosi – which translates as western toast – and it lives at the culinary crossroads where French toast meets a fried peanut butter and jelly sandwich.

Is it fair to say that here in Ireland, before we embraced our brunch notions, French toast was more commonly referred to as eggy bread? And what about the French name for French toast? In France, this dish is known as pain perdu – “lost bread” – a nod to the pragmatic roots of this simple dish, which one can safely assume was invented as a way to make a meal out of stale bread. This recipe goes back a long way.

Writing for slate.com in 2003, food writer Brendan Koerner says: “The Oxford English Dictionary cites 1660 as the year ‘French toast’ first made an appearance, in a book called The Accomplisht Cook. That preparation, however, left out the eggs in favour of soaking pretoasted bread in a solution of wine, sugar and orange juice. The Dictionary of American Food and Drink contends that the first egg-based recipe in print didn’t appear until 1870; throughout the tail end of the 19th century, similar recipes appeared under the monikers French toast, Egg toast, Spanish toast and even German toast.”

Perhaps what we should really be calling this dish is Roman toast. It is believed that the earliest known reference to French toast can be found in the Apicius de re Coquinaria, an ancient collection of Roman cookery recipes believed to have been originally compiled in the first century.

The German-American chef, author and cookbook historian Joseph Dommers Vehling translated the entire tome into English for the first time in 1936. The following recipe, entitled Another Sweet Dish and translated from Latin by Dommers Vehling, sounds very familiar, doesn’t it? “Break [slice] fine white bread, crust removed, into rather large pieces which soak in milk [and beaten eggs]. Fry in oil, cover with honey and serve.” You’ll find the full translated transcript of Apicius on gutenberg.org.

Are you suddenly craving some eggy bread to accompany the rest of your weekend? Go notions-free with simple white bread dipped in a bit of beaten egg and milk, fried in butter. Alternatively, take a luxurious route by dipping brioche or a similarly sweet bread into beaten egg mixed with cream and flavoured with vanilla and a pinch of nutmeg.

BRCA1: ‘I’m lucky that I have the chance to take preventative measures’
7

Irish woman in San Francisco: Life is quiet but everyone is exercising
9