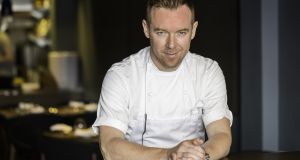 Andrew Walsh is chef-owner of Cure, Butcher Boy, Catfish and Bao Boy in Singapore. From Breaffy, in Co Mayo, he left Ireland in 2002 to go backpacking in Australia

Why did you leave Ireland?

After exploring Australia I moved to New York and worked in a fun, trendy restaurant called Public, which had one Michelin star. I was there two years, then I went to London to work for the Irish chef Richard Corrigan at Lindsay House, where he cooked a beautiful tasting menu in the middle of Soho. In 2006 Richard moved to new restaurant, Corrigan’s Mayfair, but I stayed at Lindsay House as head chef. Then I went to work for Tom Aikens in Chelsea, where I worked long hours but picked up great technique and speed. In 2011 I heard Jason Atherton was opening Pollen Street Social. It was the first restaurant in London to have a dessert bar, and the pastry chef walked out in the second week, so I ran it. It was a steep learning curve. I was 28, and we got a Michelin star in six months.

Did you train in Ireland?

I went to culinary school at the Galway-Mayo Institute of Technology, which got me a placement at d’Arcy’s Kenmare, in 2001. In Kenmare I saw lobsters, foie gras and caviar for the first time. I also learned how to smoke salmon, hunt for game and forage wild mushrooms, berries and plants. I made great friends there with people, including the French pastry chef Benoit Lorge, who is now a chocolatier making what I think are the best handmade chocolates in Ireland. In 2003 I went to Thornton’s, the second restaurant in Dublin to have two Michelin stars, and I learned the value of sheer discipline.

Where do you live now?

I currently live in Singapore. where I came in 2012 to head Jason Atherton’s Esquina and the Study restaurants. After three years I decided that it was time to open my own restaurant, and that was how Cure came about. Cure opened in July 2015. Having fallen in love with Asian flavours, I then opened Butcher Boy, a contemporary East-meets-West grill. At Butcher Boy I take my inspirations from travels in Asia and around Singapore, with dishes such as Korean steak tartare and chicken and prawn laksa dumpling. The diner gets a unique take on familiar flavours but in a different form, or paired with unconventional ingredients. My most recent venture in Singapore is Catfish, a contemporary fish grill and raw bar offering an Asian fusion menu.

Singapore must be an interesting place to be a chef

Definitely. Singapore’ s food scene is vibrant and exciting. The Singapore restaurant market is very globalised, so we offer various menus to meet rhe different requirements of our diverse guests.

Do you champion Irish foods, and is it hard to get your hands on them in Singapore?

Irish cuisine will always have a special place in my heart. Aside from missing home, the Nua menu at Cure was birthed by my love and passion for my Irish heritage. I felt it was about time I presented my culture in the best way I know how. I wanted the people in Singapore to really understand what Irish food is all about – the produce, cuisine and history. After witnessing the massive culinary movement in Ireland I decided to research the local culinary scene, and found that while we are blessed with every style of food in Singapore, I did not know of any Irish chefs or fine-dining Irish restaurants here or anywhere in Asia. I wanted to change this, and am trying one menu at a time at Cure.

Do you miss Ireland at the moment?

I definitely miss Ireland, which explains why I launched Nua Irish Cuisine at Cure. I hope that by the end of this year I will be able to head home to attend my sister’s wedding. There are many things I miss about Ireland: family, the people, the landscape, the warmth and, of course, the Guinness and food.

Some of your childhood memories have inspired your dishes. Which ones?

A “Porridge of Grains, Organic Egg Yolk, Aged Beef” is an elevated rendition of porridge. The dish is inspired by a warm bowl of oat honey porridge that I used to have as a child on a cold frosty morning at home. The Potato Crisp Sandwich is my take on a favourite childhood snack of white sliced bread slathered with butter and stuffed with cheese-and-onion crisps. The version at Cure features a potato terrine topped with crispy garlic, shallots and spring onions. The “Childhood Memories of Peat” is inspired by a fond memory of summer cutting turf with my father, whose name also happens to be Andrew Walsh. At Cure this dish is a sweet snack featuring a charcoal cracker filled with smoked peat milk ice cream.

Does Irish cuisine have a bad reputation?

We’re not all potatoes and beef. Lots of Irish chefs have created a food scene, and there are now Michelin-starred restaurants in Ireland. The scene is so diverse, with lots of talented chefs. Just before the pandemic I had made plans to invite Mickael Viljanen and Mark Moriarty, from the Greenhouse in Dublin, to come over and give a series of dinners at Cure.

How have they coped with the pandemic in Singapore?

Singapore has been handling the pandemic relatively well. It moved into phase 3 of its reopening at the end of 2020, which allows for larger social gatherings of up to eight people per table at a restaurant. The local restaurant scene is looking positive, with popular high-end restaurants reportedly fully booked since the end of last year. With the current travel restrictions, people are happy to be able to dine out.

Has the past year changed you personally and professionally?

The pandemic has changed the way I do things. Workwise, we were busy figuring out a delivery platform and menu during the circuit-breaker lockdown from April to June, while personally it forced me to slow down. I slept, exercised, ran and ate properly for a change, and it also gave me a bit more bandwidth to think creatively. Nua was born out of that.

Singapore has remarkably diverse food influences and I am on a fascinating journey of food research and discoveries. I recharge my batteries on Sunday evenings by cooking a nice dinner for myself and friends, watching a movie, opening a nice bottle of Bordeaux or Burgundy and having cheese.

What do you miss about Ireland?

My family. I have travelled across the world to realise a dream, but the absence of family is one of the biggest sacrifices. I also miss the seasons. The weather in Singapore is great, with sunshine all year round, but it can also be very intense and I miss cooking with the season – picking strawberries in the summer, making Irish lamb stew in the winter and using grouse or partridge during game season.

What is your favourite thing to eat in Ireland?

There are many things I enjoy: a good Irish stew with soda bread, a proper Irish breakfast, bacon and cabbage. I also enjoy a comforting bowl of mixed vegetable soup with warm soda bread – my brother Lyndon, who is a chef at home, makes an amazing version.