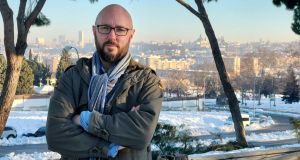 Eoghan Ryan grew up in Rathcooney, just outside Cork city. He emigrated in 2005 and has spent 13 of the past 16 years in Spain. A secondary-school teacher, he lives in Madrid with his partner, Vivian, and their two dogs

A few years ago, when my aunt died, my dad told me that she had left me an antique clock that belonged to my grandparents, but that he’d hold on to it until I settled down. I was 38 at the time.

When I moved to Valencia, in 2005, I didn’t speak Spanish and knew only one person. That first year I did up to three jobs at a time and was out at least two nights a week. I wore flip-flops, hung out in Irish bars, played a bit of rugby and met loads of people. I left Valencia a year and half later, moving to Korea and, subsequently, to Northern Ireland, to study at Queen’s University Belfast.

When I returned to Valencia I was in my 30s and wanted to make a home there. I got a better job and improved my Spanish. Eventually, I got a master’s in education, which qualified me to work in secondary schools here

When I returned to Valencia, in 2009, I was in my 30s and wanted to make a home there. I got a better job, improved my Spanish and didn’t go out as much. I set up a charity and started writing for a local magazine. Eventually, I got a Spanish master’s degree in education, which qualified me to work in secondary schools. By this time I was ready for a change. When a job came up in Madrid I took it, and started again.

By the time we entered lockdown last March, four years had passed. I had got a job at a better school, bought a flat, acquired two dogs and convinced my girlfriend, Vivian, to move in. We had a big year planned: 10 days in Colombia at Easter; Vivi would work the spring market in Madrid and the summer market in Alicante; and then we’d go to Ireland for two weeks.

Vivian is a self-employed jeweller. Her stuff is great. She makes high-quality alternative silver jewellery – but she relies on three or four artisan markets a year for most of her income. Covid put an end to all of it. Our trips were cancelled - and the markets too.

Her parents live in Bogotá, in Colombia, and she hasn’t seen them for four years, so the timing seemed cruel. She is a remarkably hardworking person, and generally very positive, but by November she was struggling. They hadn’t had a market all year here, and there wasn’t enough money to take even a token salary. Government subsidies, what little there were, had disappeared.

Covid and Storm Filomena come on the back of a decade of economic crisis, austerity policies, privatisation of public services and resurgent fascism, so the future doesn’t look good

When Storm Filomena hit, on January 8th, the Spanish prime minister told us to stay at home. I was okay with that. Doing my job remotely was no longer new, it wouldn’t affect my salary and the idea of not having to get on my moped in subzero conditions was a welcome one. The Christmas market had gone ahead, and, even though there were no tourists, it was successful enough to give Vivi’s business a lifeline.

We expected to be at home for a couple of days, but 10 days later the schools in Madrid were still closed, lots of streets and footpaths were impassable, and there was rubbish everywhere. Vivi had to continue to go to the workshop: orders needed to go out, she is working on new designs, and the online marketing she taught herself during confinement had to ramp up again.

Despite what the prime minister said about staying home, the metro was crowded, as it has been all through the Covid crisis. People who live in lower-income neighbourhoods, like ours, need public transport to get to work, and fewer of them have the option of working from home.

Covid infections have spiked again, so another confinement isn’t out of the question. In the meantime, the Madrid government, who are in opposition at a national level, continue their policy of blaming the national government for everything, it seems. Yet it is the regional governments that have failed to reinforce public health services or improve public transport since the first lockdown.

There are elements of our routine that have been forced on us this year, but much of it has to do with where we are in life

They also outsourced the Covid vaccination program, so Madrid, the worst-hit city in the country, has had the slowest roll-out. If the shoddy recovery from Storm Filomena shows us anything, it is that these policies drive further inequality and make us more vulnerable in a crisis.

We don’t yet know the extent of the economic crisis we face. Unemployment figures are still unclear because of the number of people on furlough. Many of the new social initiatives introduced by the national government are stuck in bureaucratic limbo. Covid and Filomena come on the back of a decade of economic crisis, austerity policies, privatisation of public services and resurgent fascism, so it doesn’t look good.

When you live abroad, friends and family don’t always see that you’re moving through the gears of life’s different stages, and they sometimes have an inaccurate or out-of-date perception of your lifestyle. There are elements of our routine that have been forced on us this year, but much of it has to do with where we are in life. Vivi and I got engaged before Christmas. I wonder if that qualifies me to get the clock.