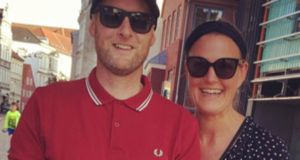 Peter Flood with his wife, Jennie

Peter Flood has lived in Sweden for 20 years, 14 of them in Gothenburg. Now he has settled 50km south of the city. He and his wife, Jennie, are teachers. They have two children, 10-year-old Norah and eight-year-old Iain

There’s a lot to be said for living in a rural location by the sea during a pandemic, but we really missed not travelling to Ireland in 2020. A year ago that would have been unimaginable, but here we are.

My wife and I have worked as teachers for roughly 15 years each, me at a secondary school and Jennie at a primary school. The pandemic hit Sweden with a vengeance just as, at the end of February 2020, I was about to book the annual school exchange to Budapest. Pupils and staff were disappointed that they wouldn’t be visiting the Hungarian capital in September 2020. Little did they know that it would be a long time before anyone went anywhere outside their own country, or even outside their own locality.

My wife contracted Covid-19 in October. Her symptoms were mild fatigue and sore wrists. She now has antibodies and is back teaching in the school building

Our children took the news of not travelling to Ireland last year in their stride, although they were disappointed about not meeting their cousins during the fleadh that had been planned for Mullingar in August. In tandem with countries around the world going into lockdown, messages from old acquaintances started to turn up on LinkedIn and Instagram – a symptom of people being at a loose end, I suppose. Their reaction to how Sweden was handling the pandemic was unanimous, however: they thought we were mad. The two conversations I had with Ray D’Arcy, on RTÉ Radio 1, in March and April last year added to the feeling of Sweden being the odd one out in how it battled coronavirus.

My wife contracted Covid-19 in October. She found this out when she went to the doctor about something else in November and was required to leave a blood sample. Her symptoms in October were mild fatigue and sore wrists. She now has antibodies and is back teaching in the school building.

As I was writing this piece the king called the Swedish government’s handling of the pandemic a failure. On December 18th the Swedish PM introduced new restrictions that could be perceived as a “light” version of what Ireland experienced in March: face masks on public transport during rush hour, the closing of all bars and restaurants at 8pm from Christmas Eve until January 24th, and the continuation of online teaching for secondary pupils until then too. (There is no such thing as a “wet pub” in Sweden; anywhere that serves alcohol must also serve food.)

Until quite recently the state epidemiologist, Anders Tegnell, was the man who could do no wrong. His tone in television interviews was both reassuring and comforting for those of us who were frightened and confused by what was unfolding. The “Swedish approach” that he proposed and implemented has now changed course. It was lambasted at home and abroad, leading the government to take a more direct approach to combating the pandemic. One has to wonder if it is too little, too late given that more than 9,000 people have now died from Covid-19 here.

I am listening to Oliver Callan on Radio 1 while I repaint my daughter’s room on December 30th. Callan indulges in some Schadenfreude regarding Sweden’s approach. It has given rise to minor scandals here, as both the prime minister and the minister of justice were spotted in crowded shopping centres before and after Christmas weekend, despite the PM’s appeal for everyone to do the exact opposite in order to slow down the spread of the virus.

The cancellation of national exams for secondary pupils will not have a major impact on their final results, as teachers in Sweden have always assessed and graded their own pupils

It is now January 7th, my wife is back at work and there is no sign of primary schools closing for the foreseeable future. In fact the board at my wife’school has not even seen fit to provide them with hand disinfectant. I, on the other hand, was told to stay at home and continue teaching online until January 24th. At a recent online meeting with my colleagues and principal it was evident the feeling was that working from home would extend beyond that date.

The national exams in Swedish, maths and English for secondary pupils that were due to take place in May have been cancelled for the second year running. This will not have a major impact on the students’ final results, as teachers in Sweden have always assessed and graded their own pupils.

No “Irish abroad” piece for The Irish Times would be complete without a tea tale. Here’s mine – albeit short. Bulk ordering from Bewley’s on my side coupled with my mother’s regular parcels from Westmeath means I have enough tea bags to keep me going well into the autumn of 2021. I could almost go into the tea export business given their abundance in my kitchen!

f you live overseas and would like to share your experience with Irish Times Abroad, email abroad@irishtimes.com with a little information about you and what you do