Welcome to my place ... Vienna

The problem is where to start. Its place in history? Classical music? Art? Architecture? 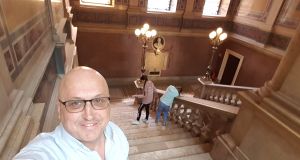 Joe Lowry in Vienna. “Go through the Prater Park. Linger over a coffee, dip in and out of parks, palaces, churches and museums.”

Joe Lowry is senior media officer with the UN migration agency in Vienna, covering southeastern Europe, eastern Europe and central Asia. He is from Dún Laoghaire, but has been overseas since 1991. He arrived in Vienna with his wife Lena from Belarus, and children Maya and Polina, after a five-year posting in Bangkok, covering Asia and the Pacific.

Where is the first place you always bring people to when they visit Vienna?

There’s no one special place. Vienna is a city for sauntering. Go through the Prater Park. Linger over a coffee, dip in and out of parks, palaces, churches and museums. Public transport is dreamily great and connects the city until the wee small hours (and there are buses and U-bahns that run all night at the weekend).

The top three things to do there, that don’t cost money, are:

Well, sauntering again is certainly one of them. Stadpark is full of statues (the shiny gold one of Johann Strauss is always mobbed with selfie-takers) and from there you can hear singers warming up in a nearby concert hall and a sax player tootling for his own amusement in a deep tunnel. I can’t emphasise how wonderful the Prater Park is. People think it’s just the Riesenrad (the Big Wheel from The Third Man and other movies), but there are many little wildernesses in this huge park and all have their own character. It’s a great place to be melancholic on your own, or wildly happy with family and friends.

Back on the streets, look down at the brass plaques on the pavements, each telling a sad individual story of deportation and extermination of Jews and dissidents during the Nazi occupation. Vienna has a history of violence in its walls as much as its music. Oh, and how could I forget – 10.15 Mass at the marvellously austere Stephansdom. On a Sunday (except in summer) you can hear a 68-strong choir belting out Masses by Mozart and other mere mortals. Get there early, sit near the front (tip – on the right side) and feel your soul stir.

Where do you recommend for a great meal that gives a flavour of Vienna?

Schnitzelwert in the ninth district. You can easily pay €25 for a Wiener schnitzel in the posh first district, but in this place you get slabs of meat with exotic twists like Mexican schnitzel for not much over a tenner. Bring a doggy bag. Pints for under €4 too. And the red wine is deep and robust.

Where is the best place to get a sense of Vienna’s place in history?

The Vienna Time Machine tour is a good way to see Vienna through the ages, and the 25-minute Ring Tram tour also gives you a good fast flavour. But I suppose you need to go the Hofburg or Schönbrunn palaces, or to the opera to really feel the might of this once great empire. The problem is where to start. Vienna’s place in history? The Habsburgs? Classical music? The first World War? Hitler? The second World War ? Art? Literature? Architecture? Dance? Freud? Falco? Rock me, Amadeus.

What should visitors save room for in their suitcase when leaving Vienna?

Mozart’s Balls. Excuse me? Yes, cheap and tasty spherical chocolates. Great for handouts when you’re showing the snaps. And schnapps....

Michael Harding: I sat alone in my room, even though I wasn’t in isolation
4

Spring dresses to dream about, whether you like them flirty or feminine
Real news has value SUBSCRIBE