We thought everything was better in Australia, but we’ve fallen for Ireland again

Jennifer O'Connell: It takes real determination to be idle on this spectacular little rock 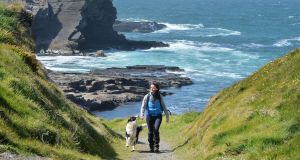 Irish gems: Sydney has the Bondi to Coogee walk. We have cliff walks in Kilkee (above) and Dunmore East. Photograph: Alan Betson

The problem with writing a column on the great outdoors is that I am, by nature, more of an indoorsy type. None of your dawn swimming for me. None of your dawn anything, if I can avoid it. Give me the great indoors -- a quiet room, a good book, an unoccupied couch. Yes, we all benefit from fresh air, which is why houses have windows.

I’m joking, but only a little bit. I like being still. I like being idle. I don’t generally do hobbies, unless you count tipsy eBay shopping, or playing with my four-year-old’s Beanie Boos, and to be honest, that one’s really more her gig than mine.

I resent being bullied into getting active. And, in the workaholic, coastal American culture that I fear we’re unthinkingly co-opting as our own, the relentlessly hyperactive are the ones who are celebrated. There’s a suspicion of anyone who isn’t sipping butterfly pea flower tea on the beach at dawn, while listening to improving podcasts and visualising their way to a kickass third quarter in the global cellulose ether derivatives market.

I regard not getting a motivational email from my boss at 4.30am a fundamental human right, on a par with personal liberty and having a Zara within a 45-minute striking distance

Our culture venerates the busyness of people like Howard Schulz, the Starbucks founder, who wakes at 4.30am and promptly sends a “motivational email” to all his employees, while sloth-shaming people like me, who regard not getting a motivational email from their boss at 4.30am a fundamental human right, on a par with personal liberty and having a Zara within a 45-minute striking distance.

So I would probably never leave the house if it wasn’t for one slightly annoying consideration. This tiny, misty rock on the outskirts of Europe that we call home is astoundingly beautiful.

In the rush of work and childcare worries and remembering to file your expenses and book a vet appointment and call your mum and organise your pension and check homework, you sometimes forget to look out the window. I didn’t look out the window properly for the first seven years of my children’s lives.

And then I went to Australia for year. Like many Irish people who go to Australia, we immediately decided everything was better there. The summers, the winters, the beaches, the parks, the sense of civic responsibility, the work-life balance, the public barbecues, the school uniforms, the coffee, the leisurewear, the birdsong, the lifestyle, the stuff they do with avocado. I became, by osmosis, an outdoorsy type. “We could never do this in Ireland, ” we said frequently, congratulating each other for our cleverness in getting off the tiny, misty rock to a place where you could sit on a beach in winter, wearing just a T-shirt, and eat chips and dips without being attacked by seagulls.

Then work took us to America for another couple of years, and for a while, the smug, outdoorsy self-congratulation continued. “We could never do this in Ireland,” we said, hiking through the redwood forest, or drinking wine among actual vines, or having winter picnics on Capitola beach in Santa Cruz.

Silicon Valley is a beautiful place, but it is also the birthplace of the 4.30am motivational email. After two years, we had become like two poorly-acquainted rodents stuck on the corporate hamster wheel, running faster and faster just to stay on. We were too busy being hunched over our laptops to enjoy it, or each other. So we came home.

Nearly three years on, there have been very few regrets. Here’s the thing I’ve realised since: most of the things you can do in California or Australia, you can do here too. You just need a better raincoat.

California has Big Sur; we’ve got the otherworldliness of Donegal and Connemara, the ridiculous beauty of Kerry, and the less overwrought charms of the Copper Coast

When we came back, we decided that we’d try to see more of the tiny, misty rock. When you’ve made a 150km round trip to go to dinner in San Francisco, 32 counties in two years doesn’t seem unachievable. After three years, I’m now in the high 20s, but I’m getting there.

In the process, I’ve fallen in love with the country all over again, or maybe for the first time: the untamed landscape; the unmitigated summer evenings; the cycle paths by slothful, meandering rivers; the way you constantly bump up against history and culture. My local Penneys has a bit of Viking wall running right through ladieswear. “It’s a shame they don’t preserve it better,” a bemused visitor said.

“Yeah,” I agreed, “it’s just we’ve so much of it. The place is coming down with stuff the Vikings built.”

It’s not a competition, but if it were, I’d say we have better history. California has better weather, but Ireland has a better climate and more daylight in summer. Sydney has spectacular beaches and the Bondi to Coogee walk, and  we have our own less assuming gems: the cliff walks in Kilkee and Dunmore East. California has Big Sur; we’ve got the otherworldliness of Donegal and Connemara, the ridiculous beauty of Kerry, and the less overwrought charms of the Copper Coast. It’s all here. It’s just unfortunate you can’t see it from your sofa.

So no sloth-shaming here. But if you’re an indoorsy type, you’ve got my sympathy. It takes real determination to be idle on this spectacular little rock.