Spike Milligan, recipient of awards for contribution to British comedy, but an Irish writer 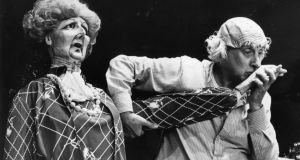 In 1994 his contributions to British humour were acknowledged when he received a lifetime achievement award for comedy during a ceremony at the London studios. Photograph: Eddie Kelly

“What would you rather have, a boring truth or an exciting lie?” – Leo Alphonso Milligan.

The above quote, attributed to his father by Terence Alan “Spike” Milligan appears to have been a question the son repeatedly returned to throughout his life. He labelled his Irish father a “fantasist”, a man who constructed an extraordinary alternative reality where he spent his time wrestling tigers, shooting elephants and strangling cobras. The apple certainly didn’t fall far from the tree.

Yet before he set about constructing his own unique fictional worlds for the benefit of the British public young Milligan experienced life as a child of the colonial elite in India and Burma, worked as a jazz trumpeter in post-depression London and fought with the Royal Artillery in the Second World War. Each experience would later provide him with fuel for countless anecdotes for chat show appearances and comedic sketches.

Born in Ahmednagar in the state of Maharashtra, India in 1918, following his father’s retirement form the military in 1931 the family moved to England. Depression-era London came as a profound culture shock to the 12-year-old, accustomed as he was to the privileged way of life he had enjoyed in the Indian subcontinent.

Finding himself of reduced means he reportedly saved up the money to purchase his first trumpet by selling tobacco he pilfered from the cigarette factory he worked in as a teenager. He was a natural musician and soon had also mastered the guitar, drums and the piano. He performed as a jazz trumpeter and a vocalist in clubs around London in the late 1930s before he was drafted in the British Army following the outbreak of the second World War.

He would take part in the Allied operations in North Africa and Italy, but also spent a good deal of his time amusing his fellow soldiers. His desire to entertain and distain for authority figures, protocol and bureaucracy were characteristics that were amplified during his time in the armed forces. He often used episodes from this period of his life, either real or invented, to highlight the ludicrous nature of blind obedience to one’s superiors, like when a commander attempted to chastise him with the immortal line: “Silence when you speak to an officer!”

Once back in England with the war behind him he began touring with the Bill Hall Trio before teaming up with Harry Secombe, Peter Sellers and Michael Bentine to create the legendary “Goon Show” for BBC Radio in 1951. It was here that he pioneered the use of abstract sound effects on radio, something that had never been tried before. Their surrealist comedy show was a phenomenal success and Milligan ended up writing 26 half hour shows a year for over 8 years, a substantial project which took a great toll on his mental wellbeing and marital relations but made him and his co-stars national celebrities.

After the run ended he spent the next decade struggling to find work. With the introduction of the British Commonwealth Immigration Act he also found himself stateless, so in 1962 he applied for Irish citizenship “I had a great surge of being Celtic. I would like to be known as an Irish writer. Of course I already was.”

His later years would see him move from radio to television, though his efforts weren’t always well received.

In 1994 his contributions to British humour were acknowledged when he received a lifetime achievement award for comedy during a ceremony at the London studios in which he infamously referred to the Prince of Wales as a “little grovelling ba***rd”.

Throughout his life he had also suffered from bipolar disorder which made his behaviour unpredictable and erratic and he was prone to frequent bouts of depression. For him his writing served as a salve for his troubled mind, allowing him to escape the responsibilities and duties he had to contend with in the “real” world; to avoid the boring truth in favour of the exciting lie.

Were he still alive today April 16th would see him celebrate his 101st birthday. An Irishman by right of birth and inclination, his distinct comedic style has ironically helped to shape the purview of British comedy ever since. Yet his final joke was an Irish one, and is inscribed on his headstone “Dúirt mé leat go raibh mé breoite” (I told you I was ill).

This Extraordinary Emigrants article was written by Nathan Mannion, senior curator of EPIC, The Irish Emigration Museum (epicchq.com) in Dublin’s Docklands, an interactive museum that tells the story of how the Irish shaped and influenced the world.