'Having moved to Hong Kong, the biggest challenge is the humidity' 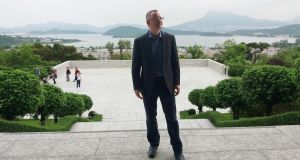 Kevin McLoughlin is a curator at the Hong Kong University Museum and Art Gallery. He visited the museum at the Tsz Shan Monastery Buddhist Art Museum last week

Working Abroad Q&A: Dubliner Kevin McLoughlin lives in Hong Kong, where he works as a curator at the Hong Kong University Museum and Art Gallery

I left Ireland for Britain in 2000 to begin studying for a PhD. I’d already completed an MA in the UK a few years earlier and before that had studied in Beijing. After I completed my PhD, I continued to work as a curator in museums in Britain. In 2017, I spent a year working in Chicago at the University of Chicago’s Smart Museum of Art. Right now, I’m working as a curator at the Hong Kong University Museum and Art Gallery.

I did my first degree in Dublin at the National College of Art & Design, where I specialised in fine art printmaking. Of the various printmaking techniques, etching was the one I enjoyed working with most.

I received a scholarship to spend a year studying Chinese language in Beijing. After that I completed an MA in Chinese Art and Archaeology at Durham University; and later went on to complete a PhD in Chinese Art History at the University of Sussex.

Tell us about your specialism in Chinese art

I’ve worked with Chinese art and archaeological materials from all periods from prehistory to contemporary, but the periods I specialise in are the Ming (1368-1644) and Qing (1644-1911) dynasties - the last two dynasties of the Chinese imperial system. Chinese Art History involves not just knowledge of that field, but also history, archaeology, anthropology and religious studies. China is my main field of study and both of my postgraduate degrees were focused on China. My work has involved working with other Asian and especially East Asian cultures. I particularly enjoy working with Korean art and visual culture, and with the art and visual culture of the Tibetan and Himalayan regions.

You speak Mandarin. Is it important?

It’s essential in the field I work in. I studied Mandarin or Modern Standard Chinese in Beijing, which involved reading simplified characters formally adopted and implemented in the People’s Republic in the late 20th century. However, for curatorial and academic work it’s necessary to be able to read the traditional complex characters that pre-modern Chinese was written in. It was its classical form in imperial times and was the literary language of the educated Chinese, used in the Chinese Classics: Confucius and so on. I also need to be able to read and decipher characters across the different script forms in which written Chinese can appear, for instance on seals, reign marks or calligraphy.

How important is it to know about China’s contribution to art and art history?

Hugely important. China has played and continues to play a very significant role in world history and civilisation. And obviously it’s always beneficial to understand other peoples, cultures, and histories, and the ways in which those peoples, cultures, and histories have developed and interacted with other peoples and cultures. In understanding others, we better understand and enrich ourselves and world we live in.

Tell us about your job now.

I’ve just started work as a curator at the Hong Kong University Museum and Art Gallery. I’ve worked at a number of university museums and collections in the US and Britain, so it’s a role I’m very familiar with. University museums typically play a role in teaching aspects of Museology (the practice of organising, arranging, and managing museums) and Art History to students, as well as working with student interns to give them experience in various aspects of museum work. But as I’ve just started here, I’m still familiarising myself with the museum and its collections, and getting up to speed with forthcoming exhibitions and other projects. I'm also co-editing a book on Chinese print culture to be published later this year.

It can be very varied and typically depends on institutional priorities and projects. It also depends to some degree on the museum I’m working in. But curatorial work typically involves some combination of work on exhibitions including writing catalogues and curating permanent galleries and displays. In addition, there is collections’ management, staff management, fundraising, and making new acquisitions.

What challenges do you face?

Having moved to Hong Kong from Edinburgh, the biggest challenge right now is dealing with the combination of heat and humidity. Especially the humidity!

Hong Kong really is all of those things you may have seen in movies. It’s a densely populated, lively, and bustling city. It’s also very cosmopolitan, outward looking, and dynamic; and very accommodating of others from outside Hong Kong. I’m sure I’ve only scratched the surface so far, but in the time I’ve been here I’ve enjoyed exploring the street markets in Kowloon’s Mong Kok, and the stunning country parks. These are extensive and offer great hiking among jungle and mountain terrain, and there’s plenty of wildlife - I’ve already encountered a wild boar! These parks are easy to get to and offer a welcome change of pace and scenery from the more crowded areas of Hong Kong Island and Kowloon.

Hong Kong is renowned as one of the world’s most expensive cities. Accommodation here is certainly the biggest financial challenge, although the size of apartments on Hong Kong Island and Kowloon tends towards the more (read very) compact. In other aspects of life Hong Kong can be much more affordable with eating out being a good example. There is no shortage of cheap places to eat out in Hong Kong and many different cuisines to try. Public transport here is both inexpensive and efficient and easy to use.

Yes, undoubtedly. I’ve been able to gain postgraduate degrees; pursue a career and develop professional experience and knowledge that I really could not have achieved at home. I’ve also been fortunate in being able to work and study in several countries. That said, I’m still very grateful to Dr Michael Ryan, the then director of Chester Beatty Library, for giving me my start in museums. The hugely significant East Asian and other collections at the Chester Beatty Library are something of which Ireland can be very proud.

What advice would you give to someone interested in pursuing a career abroad?

Do your homework and educate yourself about the history, culture and customs, and anything else you might need to know about wherever you’re moving to. Take the time and make the effort to get to know people, both local and expat. Obviously, if you have Irish connections, seek out their insights and advice.

As I’ve only just arrived in Hong Kong I’m still finding my bearings, so I haven’t met anyone from home yet. When I was working in Chicago in 2017, I joined the Ireland Network, which met every month and was a great group to connect with, made up not only of Irish expats but also those interested in Ireland or with family connections.

Yes, my parents and family are there, and I still have friends in Ireland, and despite having lived in many places, and in several countries, Ireland remains home. I don’t think that will change.